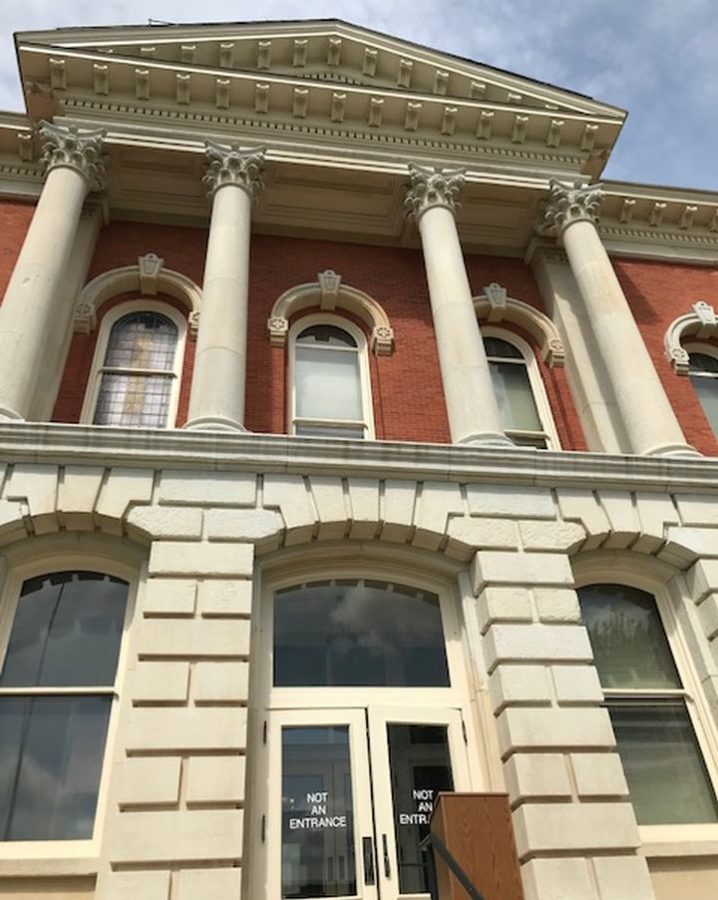 Saturday at 11 a.m. the County Commissioners conducted a rededication of the courthouse commemorating its 150 anniversary.

Marshall County Historian and former County Commissioner Kurt Garner welcomed a couple of dozen citizens and elected officials to the ceremony and gave some brief details.  He said, “This iconic symbol of the resolve by our forebears has been entrusted to us. Passed down through generations and it is our resolve to see that it remains that symbol of pioneer spirit and pride in self-government as the temple of justice as county Historian Daniel McDonald called it for our people.” McDonald recorded the events from the dedication 150 years ago noting the cornerstone being laid on August 25, 1870, under the supervision of the Masonic Fraternity.

The courthouse was designed by Chicago Architect Gurdan Randall and constructed by Epperson Favorite of Lafayette for $105,000 over 2 years.

Tim Pletcher President of the Plymouth Kilwinning Lodge 149 offered the prayer of rededication and an explanation of laying the cornerstone.

Kevin Overmyer, President of the Marshall County Commissioners thanks his fellow commissioner, Mike Burroughs and Stan Klotz for their support in the endeavor to restore the courthouse. He also all the companies and workers involved in the work to restore the clock tower.  The overall cost is expected to be approximately $3 million and will be completed by the end of July.

Jim Masterson, Vice-President of the Marshall County Council said, “As you look up and look at the clock tower we can thank the commissioners and the collaborative effort with all of the councilmembers for all of their work.  We know this has not been an easy thing to do because of the monies but somehow God made it happen and we are very thankful that nothing had to be taken off this building.”  He continued by thanking all the taxpayers for helping and wishing the county the best to do the project.

Circuit Court Judge Curt Palmer acknowledged several of the Circuit Court judges that came before him and served a larger district than just Marshall County.  It wasn’t until 1930 when Judge Albert Chipman became the judge of the 72nd Circuit Court in the State of Indiana and the first full-time judge in the courthouse.  There were several members of his family in attendance at the rededication ceremony.   Since then, there have been 18 people serving as the Marshall County Circuit Court Judge.

Judge Palmer thanked the current and previous commissioners and maintenance staff who have maintained and looked after the courthouse.  He said, since 1872 there have been major remodels or repairs to the courthouse about every 35 years.

The short ceremony was closed with Linda Star leading those in attendance in singing “Back Home Again in Indiana.”