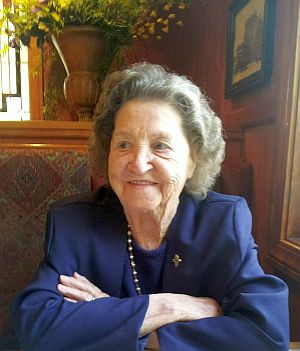 Lifetime Plymouth resident Dollie Mae Ketcham, 96, passed away in her home with her loving family by her side on Saturday morning May 28, 2022.

Born in Plymouth, Indiana on November 1, 1925, Dollie was the daughter of Evert and Goldia (Gross) Samuels. She graduated from West High School with the class of 1942.

She was a loving housewife and mother for many years and in her later years, drove for JJR until her retirement in 1981. She was a self-taught pianist and played for the Eagle Creek Church in Knox for over 20 years.

In her later years, her missions in life included: quilting and donating them to anyone in need, baking pies and sharing them with anyone, and making pet blankets and donating them to various veterinary offices. Again, Richard and Dollie were obsessed with Christmas and turned into elves during the season, listening to Christmas music, hanging lights and decorating the whole house. She was also a collector of seasonal villages that she would change throughout the year and lighthouses.

She was preceded in death by her husband Richard in 2009; her son John in 1975, son Larry in 2011 and daughter Della (Chuck) Watson in 2021; infant grandchildren: Tommy, Lucas, and Phoebe; her parents; sisters: Stella Hagle, LuLu Patterson, Ruth Murray, Wanda Samuels, Ethel Johnson and Velma Ottow; and brothers: Ernest, Albert, Tommie, John and Ira.

Burial will be in the Gross Cemetery, Plymouth.

In lieu of flowers, memorial donations can be made to Marshall-Starke Development Center, 1901 PIDCO Drive, Plymouth, IN 46563.

Online condolences may be sent to the family at www.johnson-danielson.com