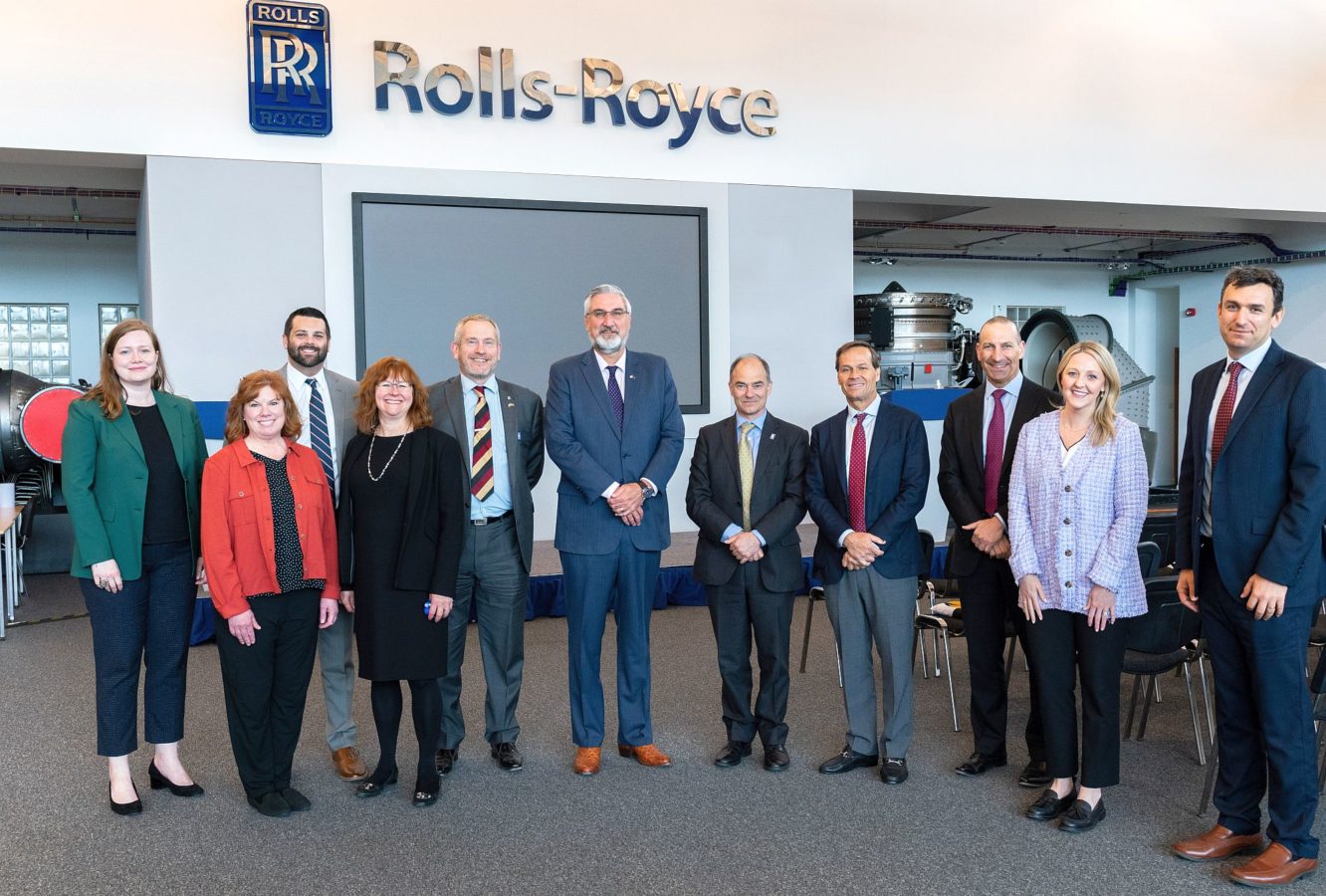 “Sec. Chambers and I had an extremely productive week reaffirming trusted partnerships with European-based companies and fostering collaborative discussions with government officials,” said Gov. Holcomb. “The efforts of this trip are already resulting in new investment interest in the Hoosier state, and we look forward to propelling that momentum even further.”

On Monday, Gov. Holcomb, Sec. Chambers and the delegation, which included Indiana Economic Development Corporation (IEDC) senior staff members, met with Saab leadership, including President and CEO Micael Johansson and board chair Marcus Wallenberg, to further collaborate on how Indiana can invest in industry-changing technologies that promote defense and national security. The group toured Saab Aeronautics in Linkoping to learn more about the company’s fighter aircraft technology and advancements.

Tuesday before traveling to the U.K., the delegation met the American Chamber of Commerce in Sweden, which promotes U.S.-Swedish business and provides networking, knowledge sharing and policy-shaping platforms. The breakfast discussion highlighted Indiana’s economic growth and concierge approach to business development. Indiana is home to 27 Swedish companies that are building and championing a new energy and technology ecosystem.

On Wednesday, the delegation met with U.K. Minister of State at the Department for International Trade Penny Mordaunt to discuss opportunities for collaboration and economic development through a possible Indiana-United Kingdom Memorandum of Understanding focused on building an economy of the future. The state’s partnership with the Department for International Trade will help enhance economic and workforce development across Indiana’s more than 100 U.K.-based companies and bolster new partnerships in key sectors like advanced manufacturing, aerospace and aviation, life sciences, agriculture and agbioscience.

Later that day, leaders from Titus Group, Cosworth, Meggitt and DS Smith met the delegation to discuss how their respective Indiana operations can continue to grow in Indiana.

Gov. Holcomb and Sec. Chambers ended the day meeting with Nick Hampton, CEO of Tate & Lyle, a global provider of food and beverage ingredients and solutions, to discuss how Indiana can continue supporting the company’s integrated energy system in Lafayette, where it has employed more than 500 people and invested approximately $75 million in energy and operational efficiency projects over the last two years.

On Thursday, Gov. Holcomb and Sec. Chambers traveled to Bristol to meet with CEO Warren East, early career professionals and other leaders from Rolls-Royce, which employs approximately 3,300 in Indiana, to see and discuss the company’s latest technology, sustainability and clean energy activities. Rolls-Royce’s net zero strategy was highlighted during a tour of the company’s Bristol facility, which is developing jet engine technologies to reduce emissions and set efficiency benchmarks.

On Friday, Gov. Holcomb and Sec. Chambers joined a reception with leaders from Andretti Autosport and Formula E to discuss ways these cutting-edge, global companies can help bring innovative and globally connected talent to Indiana.

On Saturday, Gov. Holcomb and Sec. Chambers met with His Serene Highness Prince Albert II of Monaco at the Palace to discuss Indiana’s inaugural Global Economic Summit, for which representatives of the Embassy of the Principality of Monaco in D.C. will travel to Indianapolis later this month.

On Saturday, Gov. Holcomb and Sec. Chambers met with leaders from Avalanche Andretti Formula E ahead of the Season 8, Round 6 race through the historic Circuit de Monaco. This race highlighted the future of all-electric professional motorsports, which includes a combination of high performance, efficiency and sustainability. The IEDC’s partnership with Avalanche Andretti Formula E amplifies Indiana’s leadership at the intersection of the battery technology, automotive manufacturing and racing. While watching the race, the delegation engaged with existing and prospective leaders in international markets, and discussed electric vehicle mobility, innovation and start-up/scale-up businesses, particularly in the green economy space.

Throughout the week, the delegation also met with industry leaders and top state officials, including Ambassador to Sweden Erik Ramanathan, and Minister of State for Business, Energy and Clean Growth Greg Hands, to discuss future collaborations and highlight Indiana as a hub of inspiration, ingenuity, determination and collaboration.