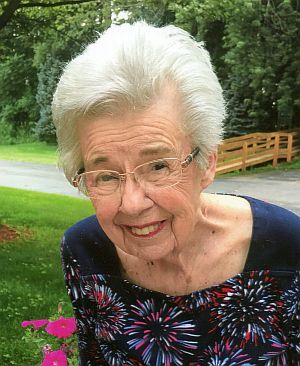 She was born in Fulton County, Indiana on January 4, 1929, to Oren B. and Marjorie (Stockberger) Conrad. She graduated from Richland Center High School with the class of 1947. She worked for Topps Manufacturing from 1948-1949 and at Stay Rite during the summer.

On April 17, 1949, in Richland Center, Indiana at a Methodist church, Helen married Clyde E. Bick. The couple began a family while living in surrounding cities, making many new friends.

She worked at Harvey’s Dime Store as a cashier and craft buyer beginning in 1969, and then when Clyde semi-retired she became assistant manager until her retirement in 1991. The two would begin wintering in Mission, Texas in 1993.

Helen was a member of First United Methodist Church in Plymouth. She collected stuffed animals and in particular bears, from 1991-1999. She enjoyed making goose clothes and dressing them up for the seasons, playing cards, Swedish weaving, embroidering, knitting, and making greeting cards. Helen taught classes at Miller’s Merry Manor, teaching others the art of making cards. She enjoyed time spent and memories made with her family.

She is survived by her son, Edward L. (Jannan) Bick of Detroit, MI, and daughter, Barbara A. (James) Cox of Plymouth. Also, two grandchildren, Erik (Elizabeth) Cox of Plymouth and Nichole Simpson of Plymouth; five great-grandchildren: Sterling and Callum Simpson and Weston, Evelyn and Olen Cox; her sister Bonnie Lou (Ross) Fear of Akron, and nieces and nephews.

Helen was preceded in death by her husband Clyde in 2016, her parents and her brother Howard Lee Conrad.

She will be laid to rest next to Clyde in the New Oak Hill Cemetery Columbarium, Plymouth.

Memorial contributions can be made to Center for Hospice Care 112 S. Center St. Plymouth IN 46563.