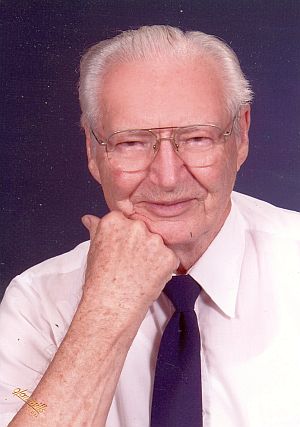 Bill E. Reynolds, 95, passed away in his home in the care of his family and hospice on Wednesday, March 2, 2022.
Bill was born on December 17, 1926, in Chicago, Illinois to George L. and Flossie R. (Wooley) Reynolds. The family would move from Chicago in 1940 to Terre Haute, Indiana where Bill graduated from Gerstmeyer High School in 1944.
He served in the U.S. Army in WWII and was stationed in Berlin, Germany after the war. He married Gerda Weiche of Berlin on March 14, 1948, at the Maple Avenue Methodist Church in Terre Haute, IN.
Bill and Gerda moved to Plymouth in 1950, where he was employed by the Postal Service for 18 years as a postal transportation clerk on the Pennsylvania Railroad from Chicago to Pittsburgh, PA. When the passenger service was discontinued in 1967, he worked at the South Bend Post Office. He retired in 1984 from the Plymouth Post Office as Supervisor of Postal Operations.
His first wife Gerda would pass in 1992. Bill remarried in 1998 to Helen Adams. They resided on Ferndale Street in Plymouth for several years as a happy couple.
Bill was a member of the First United Methodist Church for almost 70 years.
He is survived by his daughter Mary E. (Dan) Sloan of Merritt Island, Florida and son William N. (Alanna) Reynolds of Springfield, IL; step-children: James (Barbara) Risner of Warsaw; Drema (Todd) Montgomery of Burket; Debbie (Mike) Jensen of Hamlet; Danny (Donna) Risner of Warsaw; grandchildren: Brian Sloan, Katherine (Jesse) Costa and Nathan Reynolds; and 14 step grandchildren.
Bill was preceded in death by his parents, wife Gerda, his second wife Helen and brothers George and James, step-son’s William Joe Risner and Paul Dean Risner.
Visitation will be held on Thursday March 10, 2022 from 1-3 pm at Johnson-Danielson Funeral Home, 1100 N. Michigan Street, Plymouth. Funeral services will follow at 3 pm with Pastor Tim Lee officiating.
Burial will be at a later date in the New Oak Hill Columbarium with Gerda in Plymouth with Military Honors provided by members of the American Legion Post 27, Veterans of Foreign War- Marshall County Post 1162 and Disabled American Veteran Chapter 42.
Memorial contributions can be made to Kindred Hospice, 1476 W. 18th Street, Rochester, IN 46975.