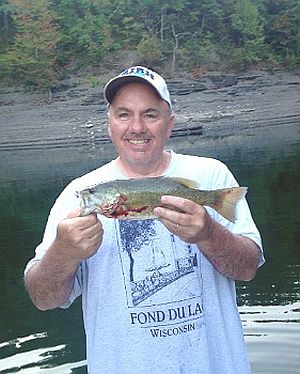 Lynn Couch, 55, passed away on Friday, January 21, 2022 at Parkview Regional Medical Center, Ft. Wayne. Born on January 5, 1967 in Plymouth, Indiana he was the son of Robert Couch and Vicki Smith Begley.

Lynn graduated Argos High School in 1985.  He has worked in manufacturing since, Lobdell-Emery in Argos, Bomarko in Plymouth and Lake City Heat Treating in Warsaw.

In 1992 he moved in with Missy Hurford.  They were married on October 24, 2003 in Pigeon Forge, TN with 24 family and friends to witness.  Then came back to Indiana to have a Halloween theme reception for all the family and friends.

Lynn was a very hard worker, but his favorite things were vacations, playing golf with friends and watching the Cubs, no matter how bad they were playing and loved to fish.

Lynn was loved by many friends and family.  He was the first to say he was weird and that is why everyone loved him so much, he was just himself.

Lynn is preceded in death by his mother Vicki.

Per the wishes of the family a celebration of life will be held on a later date.

Memorial contributions can be made to Make-A-Wish Foundation