Judge Sarber Files for Candidacy to Marshall Superior Court No. 3 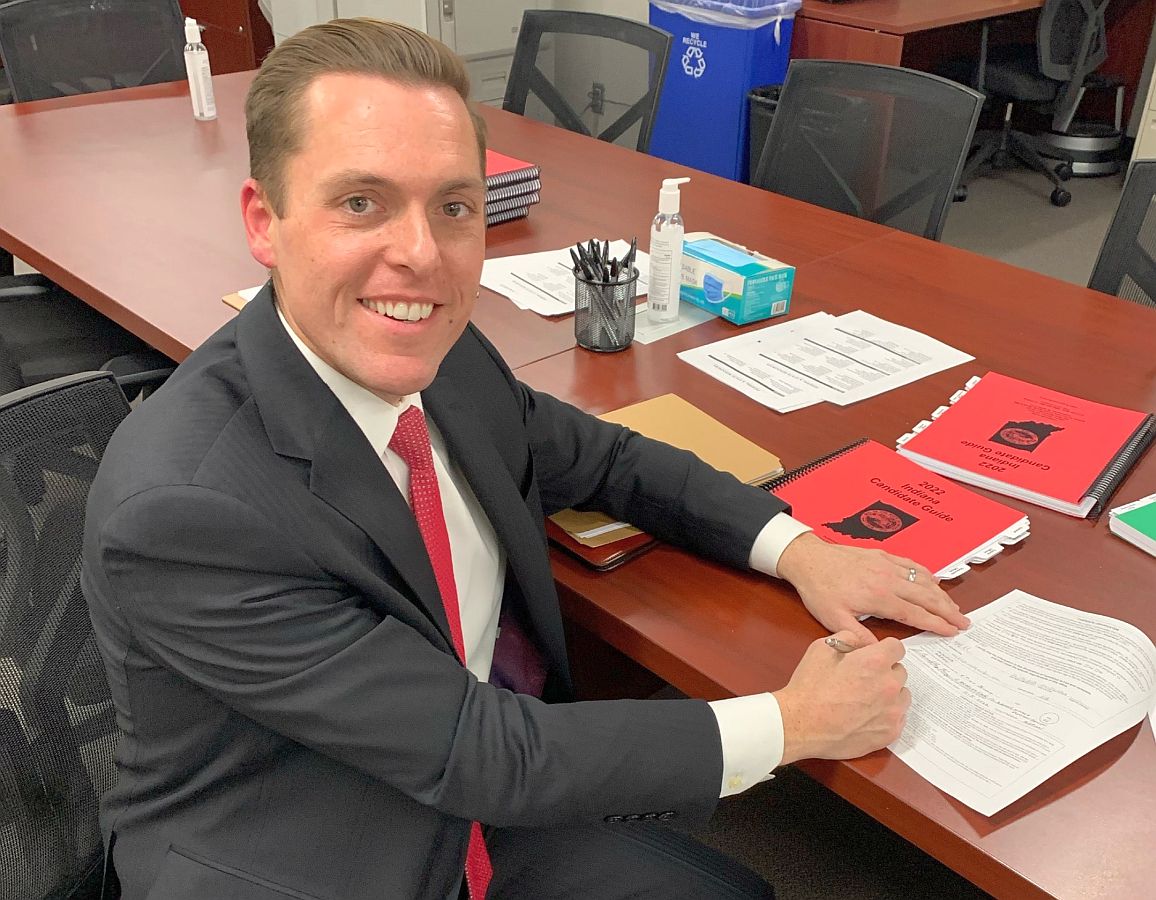 Judge Matthew E. Sarber, Marshall Superior Court No. 3, filed his declaration to seek election to the judicial post he currently fills. On January 5, Judge Sarber filed his declaration to seek the Republican party nomination in the 2022 primary election and corresponding general election. This officially begins the election process for the Marshall Superior Court No. 3 judgeship.

Judge Sarber is a sixth generation Marshall County resident, with his ancestors settling in the community around 1863. He and his wife, Erin, are committed to the Marshall County community living and working here for the entirety of their careers. Erin Sarber is an English educator at Lincoln Junior High School in the Plymouth Community Schools district.

Judge Sarber studied History and graduated from Manchester University, where he also met his wife. After undergraduate studies he attended Valparaiso University School of Law and graduated through their honors program.

Upon graduation Judge Sarber began work for Hon. Dean A. Colvin as a law clerk in the Marshall Superior Court No. 2. He immediately passed the bar examination and went into private practice as an associate attorney at Lukenbill & Lukenbill, LLP. During the years of his private practice, Judge Sarber was a Public Defender in Marshall Circuit Court and the Marshall Superior Courts No. 1 and 2. He handled criminal defense matters, general estate planning, transactional business affairs, and civil litigation.

After working for Lukenbill & Lukenbill, Sarber was appointed to the position of Deputy Prosecutor by Marshall County Prosecutor E. Nelson Chipman, Jr. Sarber filled that role for approximately five years. During that time Sarber represented the State of Indiana on major felony cases, driving related offenses, and office administrative appearances.

The Indiana General Assembly authorized the opening of the Marshall Superior Court No. 3 in 2021 to alleviate the case load of existing judicial officers. Sarber was appointed in mid-2021, through a competitive selection process, to serve as Judge presiding over the new court’s caseload beginning July 1st. This appointment expires at the end of 2022, and Judge Sarber is seeking election to continue the work he started.

Since taking office as Judge, Sarber worked to streamline case dispositions and efficiently process criminal cases to eliminate delays in pre-trial processing and holding time. Additionally, planning has begun to open a Problem-Solving Drug Court in April of 2022. Judge Sarber, together with collaboration from the Problem-Solving Court Team, spearheaded the planning efforts beginning in the Fall of 2021.

Judge Sarber wrote, “Today is an incredibly proud and humbling moment. It is an honor serving as Judge in Marshall Superior Court No. 3, and every day I look forward to the opportunity to positively impact Marshall County through that service.”

Judge Sarber continued, “This core of the election to Judge of Marshall Superior Court No. 3 is continuing the vital work we began upon appointment to the position. Since the appointment my staff and I worked to create the Problem-Solving Court, monitor pre-trial detainees to ensure jail population compliance, implement electronic probable cause review in urgent police investigations, streamline civil and criminal case management, and advance the judiciary in Marshall County.”

“I ask that the citizens of Marshall County support my candidacy at the ballot box, and I pledge to return that support through positive programs and opportunities for our community. Thank you for all your kind and heartfelt support – you have my deepest gratitude. Thank you to my wife, Erin, and three sons, for all the love and support you provide.”