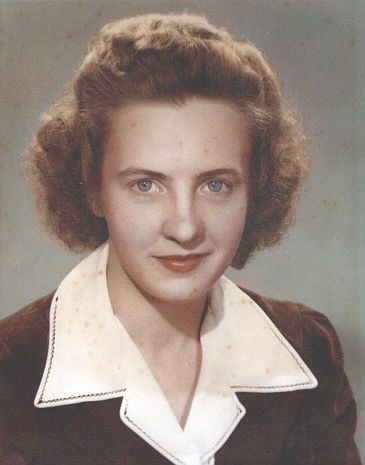 Jean Lillian Schumann was born in the family home in Chicago, Illinois on July 8, 1927 to Edith and Otto Schumann. She was raised during the Depression in Argos, Indiana by her Swedish Immigrant grandparents, Axel and Beda Nelson in a country setting. “The Farm” was her favorite memory in later years. Chickens, dogs, cats, strawberries, milk cows and Grandpa’s beloved work horses were all part of her childhood. It was during that time that she developed her passion for everything in nature, especially wild birds. A strong work ethic, along with kindness, were embraced there. Her brother, Paul, and two cousins, Kay and Ron grew up with Jean.

Jean left her job at an attorney’s office and became the bride of Bill Green of Culver in September of 1948. Four children arrived in the years following their marriage. Jean was a consummate homemaker, cooking and baking most of the family meals. She enjoyed the Women’s Bowling League, being a Cub Scout Leader, a Sunday School teacher, and gardening. She was also a member of the Women of the Moose Lodge. She had an amazing talent in all kinds of sewing, needlework and crafting. Her sense of wonder never left her, and she smiled at every child she met.

Jean was preceded in death by her husband; mother; step-father, Philip Bender; her son, Tom; her brother; and her son-in-law, Bill Wagoner. Survivors include her son, Art Green; and his son, Matt (Melita) Green; and their children, Madison and Maddox; and Art’s daughter, Renee Green; daughters, Connie Green and Jan Wagoner (Steve Listenberger); her late son, Tom’s daughters, Misti and her daughter Shelby; and Myranda and her children, Mya and Skyler; and daughter-in-law, Debbie Green.

Many thanks to We Belong Senior Home in Plymouth for excellent care and kindness.

Cremation has taken place. No public services will be held, per Jean’s wishes.

Deaton-Clemens Van Gilder Funeral Home is privileged to be entrusted in assisting the family with arrangements. Condolences may be left at www.deatonclemensvangilderfuneralhome.com