Wayne A. Stoneburner, 67, of Hamlet 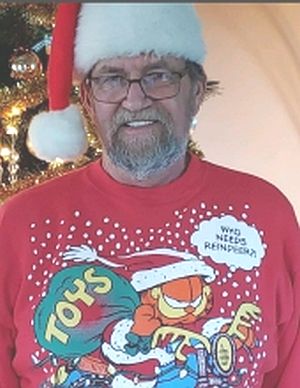 Wayne A. Stoneburner, age 67 of Hamlet, IN passed away on November 4, 2021 at 4:18 a.m. in St. Joseph Regional Medical Center of Mishawaka, IN.
Wayne was born to Homer Stoneburner and R. Elaine Hartman Stoneburner on September 17, 1954 in Plymouth, IN. He married Brenda Schultz on October 23, 1994. He was a member of Tyner United Methodist Church and he was a huge supporter of the Armed Forces, most especially M.I.A.s and P.O.W.s. One of his favorite things he did to support the M.I.A.s was to ride “The Porch” with a side car in parades. He enjoyed his career as a truck driver owner/operator and working for trailer factories making furniture. He loved spending time with his family, his “4-legged kids”-the cats, woodworking, John Deere tractors, mowing, gardening, flowers and beekeeping.
Wayne is survived by his wife, Brenda; his daughters: Jennifer Maxwell-Benson of Alabama; Tracee Montano of Wakarusa, IN; his stepdaughter, Cheryle (Bruce) Allee of Hamlet, IN; his son, Brian Stoneburner of Goshen, IN; his sisters: Theresa (Doug) Erwin of Culver, IN; Kim (Gary) Hines of Nappanee, IN; his brother, Jeff (Cindy) Stoneburner of Mishawaka, IN; his grandchildren: Mahalia; Michael; Jory; Jade; Lily; Matthew; Katie; Bradley; and 6 great-grandchildren, along with many nieces, nephews and friends. Wayne was preceded in death by his parents; and his stepson, Roger Taylor.
Family asks that memorial contributions be made to the Veteran’s Hospital of Indianapolis (151 N. Delaware St., Indianapolis, IN 46202 or https://www.volunteer.va.gov/apps/VolunteerNow/).
Visitation service will be held on Friday, November 12, 2021 from 10:00 a.m. to 12:00 p.m. at Deaton-Clemens Van Gilder Funeral Home (300 W. Madison St., Plymouth, IN 46563).
Funeral service will be held on Friday, November 12, 2021 at 12:00 p.m. in Deaton-Clemens Van Gilder Funeral Home (300 S. Madison St., Plymouth, IN 46563).
Burial to follow at Tyner Cemetery (Tyner, IN).