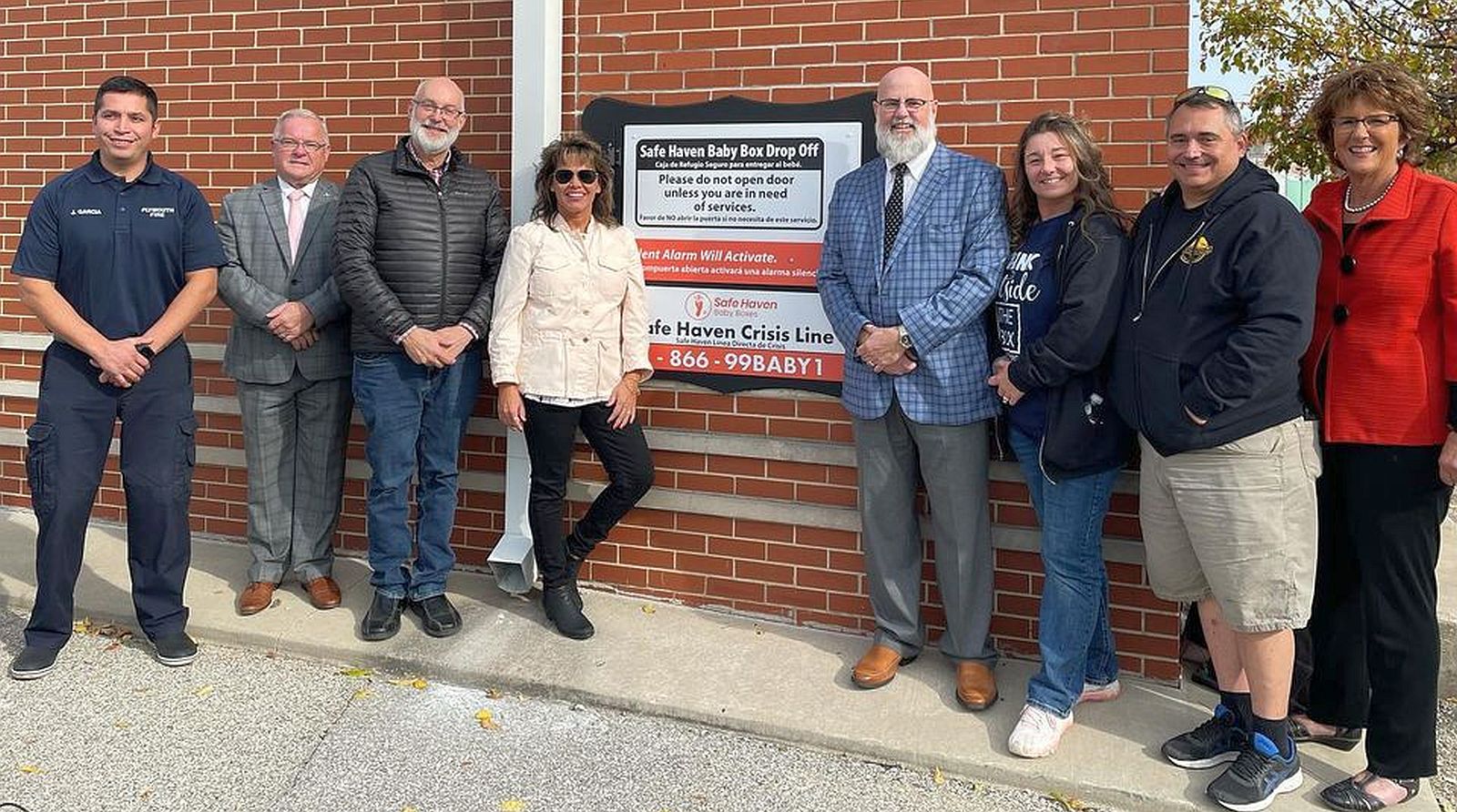 The 89th Safe Haven Baby Box in the U.S.A. was recently installed in Plymouth and Wednesday a blessing was held at the Plymouth Fire Department.

Mayor Mark Senter welcomed those in attendance and gave this favorite line, “It’s another great day in Plymouth, IN.”  He then introduced Pastor Rob Keck from the Teegarden First Brethren Church who did the invocation.  The Mayor said his assistant, Laura Mann had learned about the Safe Haven Baby Box at the Indiana Mayor’s Assistance Conference and knew the city would be making this project happen.  While the pandemic slowed the process the Baby Box is ready to save the life of an infant.

The founder of the Save Haven Baby Box and First Lady of Woodburn, IN Monica Kelsey told the group the first Baby Box was installed in Woodburn at the Fire House where her husband is Mayor.  She said, “Women in this community have a last resort option available for them if they find themselves in a crisis that they feel that they can’t get out of.”  She said she never though the box would have been used in their small city in rural Indiana but in February of 2019 a 7-pound 5-ounce baby girl was surrendered at their firehouse.  She said, “What it’s truly all about is making sure babies are not placed in dumpsters and trash cans.  That they are placed in locations that are safe and secure and their parents know that they life is going to go on and the parent’s life is going to go on as well.”

The Baby Boxes are being used across the U.S.A. Mrs. Kelsey said two weeks ago she had three calls in four days and three babies were saved. Monica said since launched in 2016 there have been no baby deaths from abandonment and a record number of babies in the boxes.

Mrs. Kelsey’s passion comes from her beginnings. In 1972 a 17-year-old girl was brutally attacked and raped and left on the side of the road. This young woman was strong enough to press charges on the man who raped her. After starting to get her life back on tract she learned she was pregnant. Two hours after giving birth the girl abandoned her baby and that baby was Monica Kelsey. She said, “I stand on the front lines of this movement ensuring that every mother has a safe place for their child when they are in a moment of crisis.”

In 2019 the Ataya Kaser Memorial Scholarship was created.  Ataya’s mother Cori donated a beautiful bench to be placed near the Baby Box.  Cori said the first time her daughter heard Monica’s story at the age of 13 she said she wanted to be a part of the program.  About 18-months later Ataya was killed in a car accident at the age of 14. The bench was designed by Ataya’s parents who have vowed to have a bench at each Baby Box.  While there are now 89 boxes this is the 18th bench.  Cori Kaser told those gathered that they lived in Walkerton and their daughter was born in the Plymouth Hospital in 2004 so the community is still their hometown even though they live near Fort Wayne.

Congress Woman Jackie Walorski attended the ceremony and said, “This is good news.  The fact that we have two individual women that are changing the course of the world for these babies that are dropped off inside a fire department.  Because they are passionate and because they want to do something, that’s how change happens inside communities.”

The blessing of the Baby Box was done by pastor Collin Sietz from Crossroads Church.