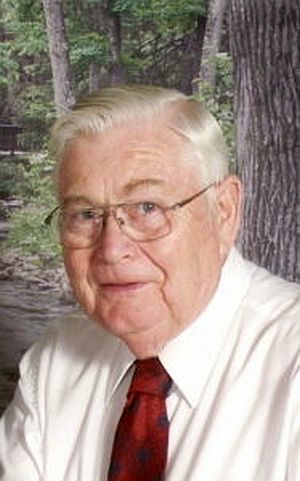 Milne (Bill) Rundle was born in Caldwell, Wisconsin on June 14, 1933 to Lawrence and Evelyn (Blakeman) Rundle. He grew up mostly in Racine County. He left school at sixteen and worked on a farm in Northern Wisconsin. He took various jobs supporting himself before finally moving back to Racine. Bill started work in the tool room of Modine Manufacturing and was offered an apprenticeship in tool and die. He attended school and received college credits in several math and job-related classes. After five years, he received his Journeyman status. During this time, he met Beverly Hesebeck, and they married in 1955. He continued in the tool and die trade for several years. Bill was promoted as the Process Engineer for corporate for 23 years. He did a lot of travelling during this time, and five out of the six children were born during those years in Wisconsin.

McCord Corporation recruited Bill and they moved their family to the Plymouth area. His family lived on North Lake Drive on Koontz Lake for 32 years. After working for McCord for 5 years, Bill went into business for himself. He established Radiator Engineering, designing and building custom machines for manufacturing companies. In 1979, their last son was born.

Bill ran his business until 2006 when he had a major stroke. The children were all grown and gone, so Bill and Bev downsized and moved to Plymouth. Bill loved to read and always appreciated a new book as a gift. He enjoyed attending the Farmer’s Market on Saturday mornings and Silver Sneakers at Life Plex. He always had a quick wit and enjoyed making friends wherever he went.

He is survived by his wife Beverly of 66 years of Plymouth; children: Melanie (Dave) White of Evansville, IN; Barbara (Steven) Hampton of Scottsdale, AZ; Meredith (James) Kelbert of Port Charlotte, FL; Beth (Jerry) Johnson of Colorado Springs, CO; Allen (Sharla) Rundle of Clinton, TN; Jonathan (Alyssa) Rundle of Avon, IN; 12 grandchildren; 8 great-grandchildren with one on the way; as well as several nieces and nephews.

Visitation will be held on Friday, November 5, 2021 from 4-7 pm at the Johnson-Danielson Funeral Home, 1100 N. Michigan Street, Plymouth.

Funeral services will be held at 11 am on Saturday, November 6, 2021, in the funeral home with Ministers Kenion Coleman and Kevin Nailleaux officiating.

Memorial contributions can be made to the Center for Hospice Care, 112 S. Center St C. Plymouth, IN 46563.

Condolences may be sent to the family through the website: www.johnson-danielson.com