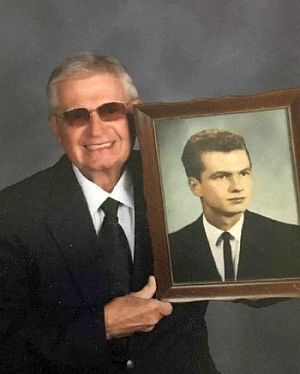 Glenn A. Weidner, 75, passed away peacefully on Monday, October 11, 2021 at home surrounded by family.
Born on April 27, 1946 in Argos, Indiana he was the son of Paul A. and Mildred L. (Mann) Weidner. He attended Argos High School graduating with the class of 1964. He graduated from Ball State University with a Bachelor’s degree in physical education and health.  He attended Indiana University, and Notre Dame where he received his Masters of Supervision in Secondary School Administration.
Glenn’s teaching career in PE/Health started at Plymouth Community Schools for many years.  He then utilized his school administration degree and became principal at Triton High School.  After 41 years of being an educator, he retired. Retirement did not come easy for Glenn.  He most recently was an elementary gym teacher at Allen Elementary school where his daughter taught kindergarten for Marion Community Schools and he worked as a teacher in the Plato lab at Marion High School where his son-in-law was principal.  He then went on to teach in Argos as the director of their Plato lab from 2018-2020.  He was an inspiration to so many students over the years! He loved helping ALL students! It was a huge accomplishment for Glenn to end his 45 years of education by being back at Argos High School which is where he graduated from in 1964.
He enjoyed photography, nature, working at Weidner’s Wide Acres cutting trees, mowing, painting and building decks among other things. He also enjoyed sunsets on the beach in Naples Florida and being on his pontoon boat at Winona Lake. You could say he was a mathematician who was always figuring numbers, he was an avid writer, and loved to collect things.  He absolutely loved all of his “grand” dogs and cats, especially Mosi and Millie.
Glenn left quite a legacy of helping others especially when it came to his students’ overcoming challenges that they were facing.  Glenn had a never give up and to keep moving forward attitude. He lived by the motto, “life is good all the time, some days are just better than others.”
He is survived by his children: Gina (Keith) Burke of Marion, IN; Glenn Weidner II of the Czech, Republic; brother Dennis (Nickie) Weidner of Plymouth; sisters: Dianne (Donald) Goeckel of Bay City, MI; Barb (Bob) Myers; grandchildren: John, Austin, Brianna, Alexandra and Hunter, as well as several nieces and nephews.
Glenn is preceded in death by his parents Paul Weidner and William and Mildred DeFoe. He is also preceded in death by his son-in-law Matthew Durbin and a nephew Kurt Weidner.
Per the wishes of the family a celebration of life will be held at a later date.
Memorial contributions can be made to the Argos High School Dollars for Scholars, 410 N. First Street, Argos, IN 46501.
Condolences may be sent to the family through the website:  www.johnson-danielson.com<http://www.johnson-danielson.com>