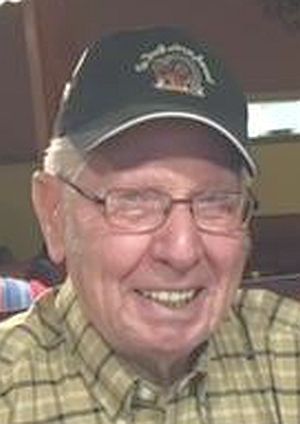 Bud had many mentors throughout his life and careers. He proudly worked as a farmer, journeyman bricklayer for 50 years, and in a late-in-life career as a lawn maintenance employee at Oakhill Cemetery. Bud was a longtime member of Trinity Methodist Church in Plymouth and brought up his children in church. Bud’s life was full of family. He supported and cheered on his children and grandchildren throughout his lifetime. Bud was a constant at sporting events, 4-H events, school events, and he never missed a birthday party, no matter the distance. He taught all his children and grandchildren his beloved game, Euchre. He enjoyed many things including coffee with friends, draft horses, and hit-n-miss engines. His life was full and he had an impact on many lives. He will be deeply missed by all his family and friends.

Bud is survived by his three daughters and his son-in-law, Richard Larson, all of his grandchildren, his sisters, Ivy Wallace, and Marilyn Roysdon, his brother-in-law, Larry (Frances) Burden, along with multiple nieces, nephews and cousins.

Bud is preceded in death by his parents; his wife and in-laws, Bank and Vera Burden; his daughter, Vicki Larson; his sister and brother-in-law, Marleen and Bob Harkleroad; his brother, Ronald Phelps; and his brother-in-law, Bill Wallace.

Funeral services will be held on Saturday, September 25, 2021 with an hour visitation before the service at 10:00 a.m. in Deaton-Clemens Van Gilder Funeral Home. Burial will take place in New Oakhill Cemetery (Plymouth, IN).