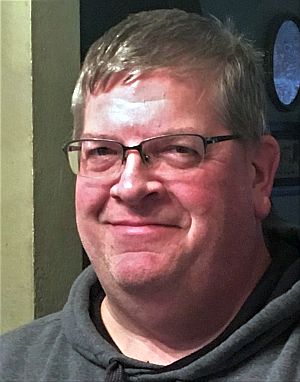 Nick Southwell, 55 of Plymouth passed away peacefully on September 10th at Memorial Hospital in South Bend.  He was born May 7, 1966 to Neil and Sally Southwell in Bay City, Michigan.  Nick graduated from Oregon-Davis High School in 1984, from Vincennes University in 1987.  Nick married Monica Wiedeman on May 12, 1989 on Dowell’s Island.

He was preceded in death by his parents, and a daughter, Susan.  Missing Nick are his wife Monica, and children Tyler, Spencer and Miranda, all of Plymouth.  A sister Kimberly Berg of Bremen, a brother Monte (Jennifer) Southwell of Valparaiso, and a half-sister Jennifer (Ken) McInerney of Alpena, Michigan.  He also had many cousins, nieces, and nephews that he loved dearly.  Nick worked at Kroger’s in Plymouth and drove truck for various trucking companies, the latest being Decker Truck Lines out of Iowa.  Nick drove over a million miles earning numerous safe driver awards in his career.

Nick enjoyed watching his Tigers, Lions, and the Colts.  He always had a smile on his face and a sweet way of making others smile.  He was a rich man in the character he possessed.  He had a genuine soul, forever grateful, with a great sense of humor and a big heart.  Nick was loved by all.

Due to COVID Nick’s last words written to his family were, “Love you all, stay together, keep God in your lives.”  He had a strong faith in God, his miracle happened in Heaven.  Thousands of prayers were sent to Heaven on his behalf, and he felt them!  He was never alone, Jesus was with him all the time.

There will be a celebration of life for Nick at a later date.

Our loss is Heaven’s gain.