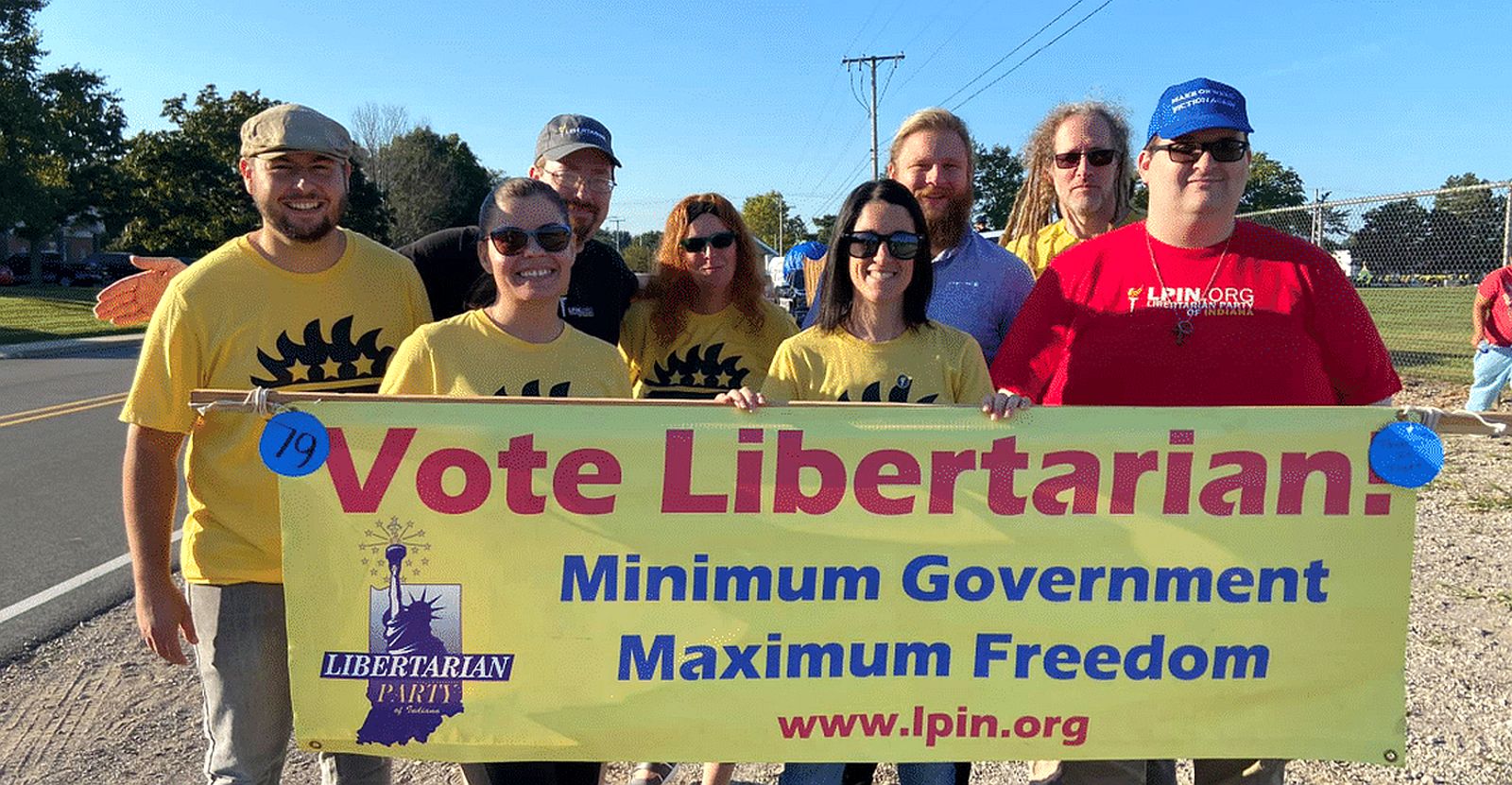 The Libertarian Party of Marshall County teamed up with LPIN members from across the state to make our presence known at the Blueberry festival.  Members from 6 counties (Marshall, Kosciusko, Elkhart, Allen, Johnson, Dekalb) showed up to help spread the message of liberty and small government during the parade on Monday, September 6th.

For many Hoosiers, Donald Rainwater’s historic 2020 gubernatorial campaign was their first exposure to the liberty movement and LPIN.  Letting liberty-minded Hoosiers know that there is a third option, a better option, was the main goal of their parade presence.

“Public reception was generally good.  As a burgeoning affiliate, it is exciting to see such great responses to the message of liberty being spread in Marshall County,” said Anthony Hutchinson

Vice Chair, Libertarian Party of Marshall County.  He continued, “Mixed in with the polite waves and genuine Hoosier hospitality were moments of real excitement over and enlightenment to the cause of liberty.”

James is seeking the LPIN nomination for the United States Senate race in 2022.  His genuine interest in protecting and preserving the individual liberties of Hoosiers, and all Americans, was on full display today, as was his friendliness and winning smile.

Hutchinson said, “We here in Marshall County look forward to hearing and seeing more from Mr. Sceniak in the near future.”

“Teamwork makes the dream work!”  The story of the day, the message to the community, and the goal moving forward is the promotion of voluntaryism in our community.

“We have to show up to these things, we have to be there for each other!” implored LPIN District 2 Rep. and Elkhart County Vice Chair, Elizabeth Coquillard.

Six counties came together to spread the message of liberty that Hoosiers are so hungry to hear.  Discussions were had and plans were made to increase our community outreach, to put our time and money where our mouths are, to be voluntaryism in action in our county and our state.  Hoosiers deserve to see that they have the power, and that many of the solutions to our problems can be solved, not by the government, but by our communities coming together and helping each other.

At the end of the day, the goal of the Libertarian Party of Marshall County and the LPIN is helping people.  Helping people in need, helping people free themselves of government overreach, and helping people advocate for their own personal liberties. Let the people become We The People again!

If any of this sounds appealing to you, we would love for you to join us! If you live in Marshall County, follow us on Facebook or email us at marshall@lpin.org.  If you are from elsewhere in Indiana, visit lpin.org to find out more about the party and your local affiliate!