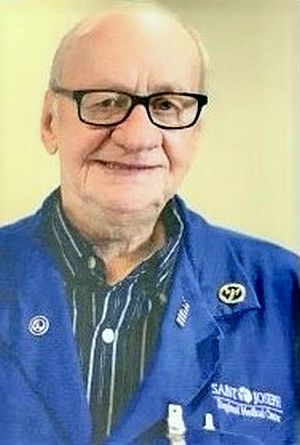 Jack R. Stapleton, 84, of Plymouth passed away on Thursday, September 2, at his home.
Born on May 18, 1937 in Elkhorn City, Kentucky to a coal miner, he was the son of Hansel and Nora (Maynor) Stapleton. Jack was born and raised in the hills of Eastern Kentucky and even though he has not physically been there in years, his heart never left.
He graduated from Elkhorn City High School in 1945. On July 5, 1956 Jack enlisted into the Air Force as an Aircraft Mechanic and was honorably discharged after four years of service. Serving our country in the Air Force was one of the things that Jack was most proud of in his life.
Jack would work for United Telephone as a manager for 30 years and would retire in 1994. His whole life he was dedicated to serving others. For 20 years he would volunteer at the Hospital and would receive the award for Volunteer of the Year in 2001.  Being a cancer survivor himself, he gave back to others by serving and volunteering countless hours to the cancer center and was known for passing out Reese’s to everyone that passed by. He also volunteered at the Marshall County Health Center, the Plymouth Public Library, and he had also been a member of the Blueberry Festival Board for more than 20 years.
To his family he was the rock that was strong through everything that happened in life. He was a great listener if anyone needed just to talk. Sometimes a little rough around the edge, but never went without telling his family that he was proud of them and never ceased to tell them he loved them.
Although divorced from his wife Vida, they remained best friends. Jack never missed a birthday or a holiday with his family. He would visit Vida through the window at the nursing home throughout covid.
He was a member of First United Methodist Church.
He is survived by his daughter, Daphne Stapleton of Plymouth; son David Stapleton of Plymouth; ex-wife Vida Creed; brother Jim (Tava) Stapleton of Elkhorn, KY; sister Helen Potter of Crestline, OH; grandchildren: Jillian Smith, Ricky (Brittney) Elm and great-grandchild Don Fox Elm.
Jack is preceded in death by his parents, siblings: Lloyd Stapleton, Bobby Coleman, Reable Robinson, brother-in-law Donald Potter, son-in-law Pedro Vasquez, and Vida’s husband Don Creed.
Visitation will be held on Monday, September 13, 2021 from 11-1 pm at the Johnson-Danielson Funeral Home, 1100 N. Michigan Street, Plymouth. A memorial service will follow with Pastor Toni Carmer officiating.
Burial will be in the New Oak Hill Cemetery, Plymouth.
Military Funeral Honors will be rendered by the U.S. Air Force.
Memorial contributions can be made to the First United Methodist Church, 400 N Michigan St. Plymouth, IN 46563.
Condolences may be sent to the family through the website:  www.johnson-danielson.com<http://www.johnson-danielson.com>.