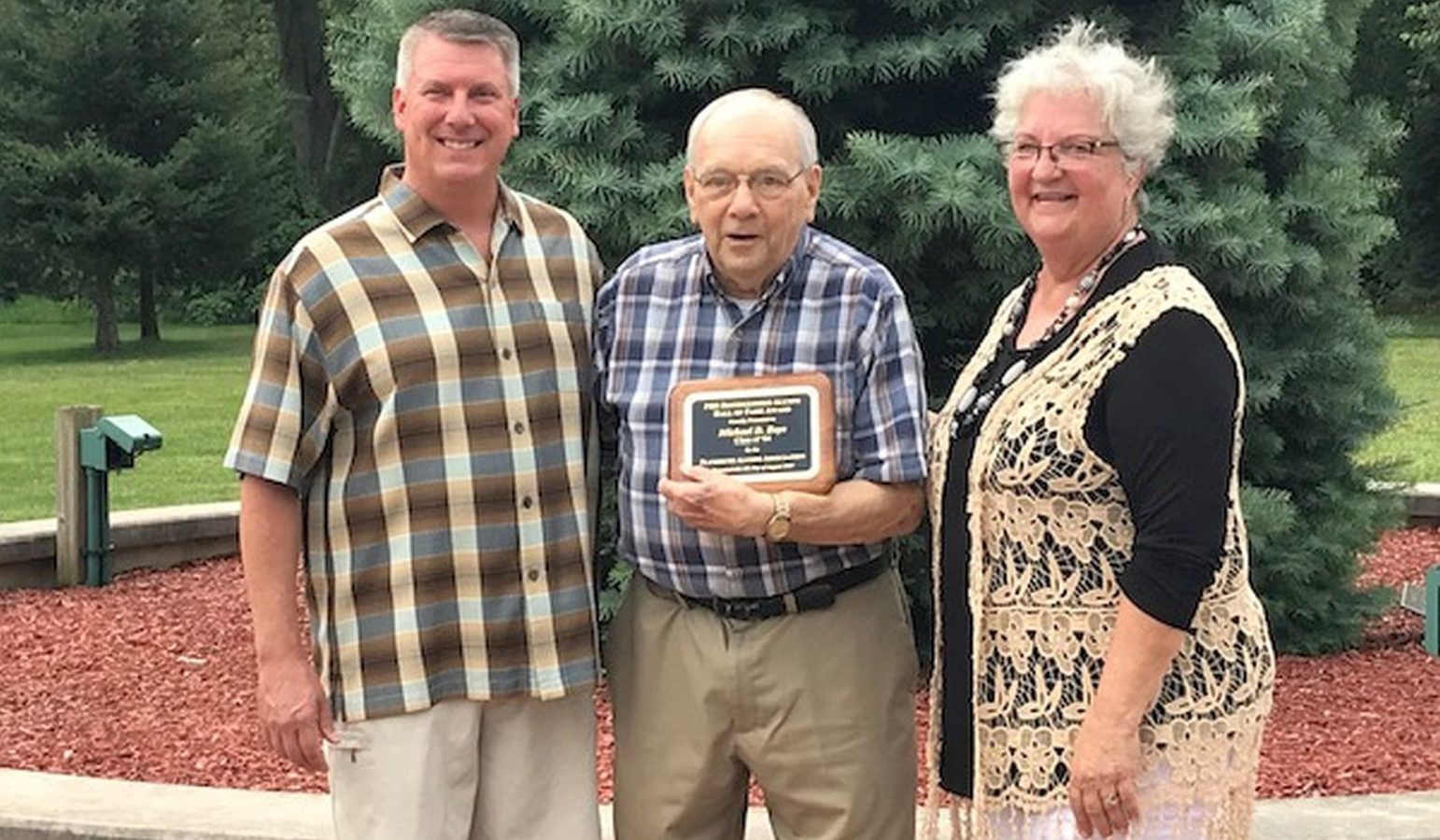 Prior to kicking off the Mayor’s Month of Music in River Park Square Friday evening the Plymouth High School Alumni Association presented the 2021 Distinguished Alumni Award.

Jan Boos Beam from the PHS class of 1968 welcomed all alumni in attendance to the PHS Alumni in the Park event started 4 years ago.  Due to the pandemic the event wasn’t held in 2020 so two classes were on hand to celebrate their 50th reunions, the class of 70 and the class of 71.  Beam also called the roll for a few other classes, 1976 celebrating their 45th reunion and the class of 1961 had a few in attendance but they are holding their reunion later in August.  Jan then introduced Randy Danielson from the PHS class of 1972 who has been leading the renovation project on the REES Theatre.

In a joking manner, Danielson reminded members of the class of 69, 70, and 71 that the Mayor’s Month of Music evening isn’t  relieving Woodstock saying, “It’s still not legal in Indiana.”

Updating the theatre project, Danielson, and his co-chair Donna Pontius class of 69 said, “The vision is all of you.”  He went on to say, “We’ve come a long way in the past 4 years with the support that you have given us, the encouragement you have given us and financial support.  We’re not completely there yet but later this month, the stars have aligned for us to go ahead and sign a contract which will open the doors of that theatre after 13 years closed next year about this time.”

Randy also spoke of the process to find an executive director “worthy of our beloved theatre.”  He said they had a lot of talent step forward and it was so appreciated. Danielson said, “Two candidates rose to the top and being the fact that we want to concentrate on that being a performing arts location, and a desire for the REES to have regional presence we decided on a proven leader from Marshall, MI.”  Dennis McKeen majored in theatre at Western Michigan University and created Top Hat Productions in 1989.  He became the owner of Marshall Horse Drawn Carriage Company in 2017, a company that provides narrated historic and ghost tours in Marshall.

Dennis McKeen was on hand and welcomed with a warm Big Red welcome.

The main reason for the Alumni gathering in the park is to announce the PHS Distinguished Alumni Hall of Fame Winner. John Oliver from the Oliver Ford Family was awarded this award two years ago as a family.

This year’s Distinguished Alumni is Mike Boys from the PHS Class of 1954.   Mike was born into a newspaper family, his grandfather, Samuel Boys, having moved here from Michigan and purchasing the paper, later to be named The Pilot News.

Mike graduated from Lincoln High School (PHS) in 1954 and then attended Defiance College where he met Joanne, noting they just celebrated their 64th wedding anniversary.  After college Mike worked in advertising and then became General Manager of the Pilot News working there for a total of 40 year.

He volunteered with the Plymouth Jaycees and was instrumental in working with a group of folks organized to celebrate Indiana’s Sesquicentennial.  That annual event is now called the Blueberry Festival and Mike served on the board of directors for over 40 years.  Mike Boys was also on the board implementing the construction of the Centennial Park Pool and the new auditorium and gymnasium at Plymouth High School.  Mr. Boys also organized several concerts in Plymouth by the U.S. Army Field Band and assisted with bringing the Vietnam Traveling Wall to Plymouth.

Mike Boys has received the Key to the City by Mayor Mark Senter and was awarded the Sagamore of the Wabash by then Governor Otis Bowen.  Mike also served 12 years at County Assessor and most recently assembled his columns from the Pilot News “Remembrances of the City of Plymouth” into a book entitled “My View from the Pilot House”.

This award was a surprise for Mr. Mike Boys.  He said Friday evening, “When I look back on the distinguished people named before me of the very prestigious award, I want you to know how humbled I am of being a part of this great community and also the people that were named before me.  I feel very humbled by that.  Thank you all and God bless you all.”

Jan Boos Bean let those in attendance know that the 2022 PHS Alumni in the Park event will be held on August 6th at 6 p.m. for the meeting and 7 p.m. for the band.