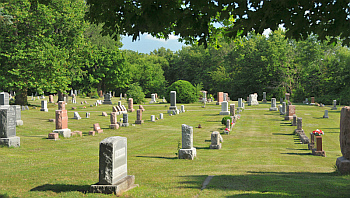 During Monday’s Plymouth Common Council meeting, Mayor Mark Senter read a proclamation in honor of Jim Ousnamer, head of the Oak Hill Cemetery for over 4 decades.

The proclamation said, “Jim Ousnamer had dedicated his life to this community, and had demonstrated in many practical ways his deep and genuine love for the City of Plymouth and especially Plymouth’s Oakhill Cemetery.

Jim Ousnamer’s father Virgil Ousnamer was Jim’s predecessor as superintendent for ten years but had been affiliated and employed at Oakhill for 45 years. The Chapel, new office and shop was a dream of Virgil’s and was built in 1975.

As superintendent for 45 years Jim worked for six mayors. He has employed approximately 200 high school students working for him as well as 150 part-time summer adults to take care of the 72 sacred acres nestled on Plymouth’s Southside.”

Mayor Senter went on to say, “Jim’s leadership and commitment to our community was renowned statewide and he had earned the respect of other cemetery superintendents and the affection of a host of area residents who were proud to call him “friend.”

He concluded the proclamation saying, “NOW, therefore, I, Mark Senter, by the virtue of the authority vested in me as Mayor, ask the Plymouth Common Council to waive the $200 chapel fee from Jim’s funeral on June 20, 2020. And with the many years of dedicated service that both Virgil and Jim have put into Oakhill Cemetery, I would like to ask the Common Council to rename the chapel to the OUSNAMER MEMORIAL CHAPEL in honor of these hard-working, devoted gentlemen.”

The Plymouth City Council unanimously approved the proclamation and mayor’s request to waive the chapel fee and rename the chapel.    Mayor Senter will have an official ceremony dedicating the naming of the chapel in the coming months.

Jim Ousnamer’s sister, Beverly Towle and daughter attended the meeting Monday evening and were given the official proclamation.