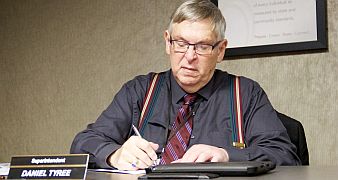 Plymouth High School Speech and Debate Team Coach, Daniel Tyree, has been named the Executive Director of the IHSFA (Indiana High School Forensic Association). The association strives to improve speech education in Indiana by offering curricular and co-curricular speech activities, including competitive activities among schools from all over the state. They have provided executive leadership since 1943.
Tyree said the association continues to create and sustain relationships with principal’s association, superintendent’s association, National Federation, National Speech and Debate Association, along with business and industry to help assure that students are gaining the skills they will need in today’s world and support education.
Tyree actively coached from 1976 to 2000 before moving into administration as assistant principal at PHS, assistant superintendent, and retired as the Plymouth Schools superintendent in 2018. From 2000-2010 he served as the principal representative and as an advisor for the IHSFA.
In 2013 his kidney’s began to fail and he had a successful transplant in 2015 donated by a former student he coached. His commitment to speech and debate programs led him to return to coaching in 2018.
Tyree said his goal out of college was to teach English and speech and coach basketball. He was introduced to competitive speech programs as he was student teaching and began pursuing openings to be involved in speech programs. He coached speech for Manchester High School for one year and for Knox High School for two years before starting the program at PHS.
Coaching speech became a family affair when Tyree married his wife Charlotte and they began coaching together in 1992. He continues to share his appreciation for the activity that allowed his three children to achieve success. Daughter Katie was a state champion and placed in national finals. Son Jon was also a national qualifier and both attended college on speech scholarships. His daughter Nancy received academic scholarships to complete her college degrees. Tyree said, “All three are articulate speakers, have strong work ethics, and are extremely organized. It is obvious that these are the skills they honed in high school speech and debate.”
Tyree said he wanted the same opportunities for all students. He said, “I have always said that you cannot measure your success by the ribbons and trophies that they win. You only judge your success when students are adults. I’ve had many students who failed to win many awards in high school, but they are using the skills speech and debate as very successful adults.” “Many former speech students have returned to testify on how much speech helped them in their careers. It really doesn’t matter what event they did in high school, they transfer their skills into those needed for their careers. Former students also say that they moved quickly in their chosen career because they are called on as someone who can stand and deliver and coherent message. Unfortunately, students say that if they had high school to do all over again, they would be on the speech and debate team. I can’t think of another high school activity that gives students so many life-long skills as speech and debate.” He said