Monday evening the Plymouth Common Council heard the Tax Abatement request of developer Kevin Berger for a 40 unit housing development that would provide workforce housing on the city’s northeast side. 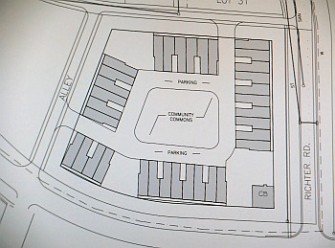 Riverside Commons would be located at the northwest corner of Baker Street and Richter Road and is part of the Marshall County Stellar Project along with a workforce housing project in LaPaz.  Burger will be applying for Tax Credits to help fund the project that will provide low to moderate income housing.

Berger explained that he will be asking for a 10 year 100% tax abatement.  This is what Culver did on a similar project and LaPaz has already approved the same tax abatement request for their project.  He went on to say, that although the county received the Stellar designation they still have to apply and the tax abatement shows city support for the housing project.  Berger said it’s very competitive.

Councilman Jeff Houin motioned to pass the resolution and said while there are still lots of details yet to be determined, this was only the first step in the tax abatement process, declaring the real estate to be within an Economic Revitalization Area.  He said he was excited to see the housing project in the Stellar application.  Some people have been critical of the council’s support for residential tax abatements such as Rivergate South and Centennial Crossings because their rents are too high.  Houin said this project will fill a need in the community.  He also said he and Shiloh Milner toured a similar project in Culver and was impressed and fully supports this project in Plymouth.

City Attorney Sean Surrisi said that the property is currently owned by the Solomon Development Group but if they are successful Mr. Berger also known as Culver Sand Hill Farms, LLC will purchase the property.