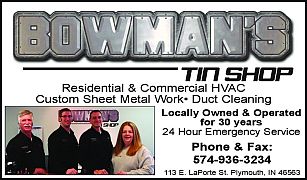 Bowman’s Tin Shop on East LaPorte Street will have a new location in the future following the actions of the Plymouth Plan Commission and Plymouth Board of Zoning Appeals on July 7th.

Heath Bowman representing HBQ Properties LCC and Bowman’s Tin appeared before the Plan Commission seeking relief from the city standards which require sidewalks along any public streets.  Bowman’s Tin plans to construct a new facility at 530 North 5th Street in the future.

The property lies on the east side of 5th Street and on the south side of Madison Street.  Planning consultant Ralph Booker showed photos of the property and explained that there have never been sidewalks on the lot.  He also showed there are sidewalks on the other side of the streets for walkers to use.

After further discussion the City Plan Commission approved the request as presented.

Mr. Bowman also appeared before the City Board a Zoning Appeals seeking a Variance of Development Standard for parking, parking access and loading standards.

Bowman said they would like to use a dust-free granular surface in lieu of hard surface pavement for service vehicle drives and parking areas and have hard surface for public access areas.  He said this would save cost on the construction project.

After hearing from a concerned neighbor who told the BZA she has had words with Mr. Bowman she went on to say she wasn’t objecting to the development but had concerns on how the service vehicles would be parked by the fence in her backyard.

The Plymouth Board of Zoning Appeals approved the request as presented.