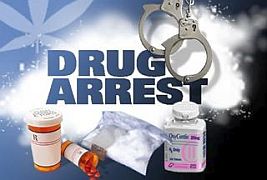 On Thursday June 25th at 11:57 A.M. Marshall County Sheriff`s Deputy Hollopeter was attempting to stop a felony suspect for a controlled substance related criminal offense. The original investigation was initiated by the Marshall County Drug Task Force. Marshall County Units and Plymouth Police Units pursued the suspect through the Plymouth area. The suspect turned into the parking lot of Economy Inn on Michigan Street and shortly thereafter collided with a Marshall County Sheriff vehicle in an attempt to evade arrest. The suspect was quickly taken into custody by police units. The suspect was identified as 44 year old, Jason C. Joseph of Plymouth. Joseph was transported to the Marshall County Jail and held on charges of Dealing Methamphetamine (Level 5 Felony), Battery Against Public Safety Official, Resisting Law-Enforcement (Level 6 Felony). With bond set at $25,000.00.