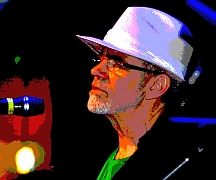 joHn Kennedy, leader of the well-known traditional Irish folk band, Kennedy’s Kitchen, and wielder of the bodhran, bouzouki, banjo, and guitar, will appear live on the Wild Rose Moon interview program, Moonlight, this Friday, June 12th at 7 p.m. Featuring an in-depth interview with host John Bahler and audio/video producer, Ryan Mear, the program will highlight some of joHn’s songs and stories concerned with his deep commitment to the Irish bardic traditions of which he is so much a part. During the evening, a second show will be taped and made available the following weekend, Friday, June 19th, at the same time, 7 p.m. Both programs will be archived for viewing on the Wild Rose Moon Media YouTube Channel which can be accessed directly from wildrosemoon.com, where a list of upcoming shows can be found. Wild Rose Moon’s, Moonlight, is made possible by a generous grant from Gibson Insurance and the Gibson Foundation and from Marshall County Community Foundation.