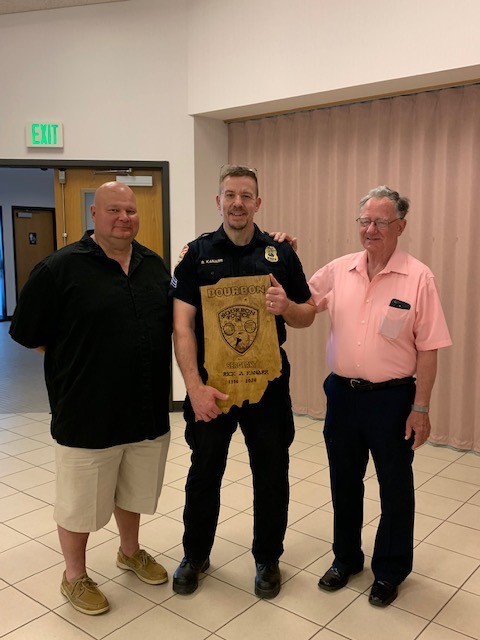 Sgt. Rick Kanarr, Bourbon Police Department, was honored at a reception on Monday, June 8 as he retired from law enforcement after some 24 years of service. Kanarr served in the Bourbon department for four years starting in 1996, transferred to the Marshall County Sheriff Department for over ten years, and then returned Bourbon for his last nine years.
He leaves the Bourbon Department as the Evidence Technician, scheduler, IDACS Director, LESO Representative, and Reserve Officer’s information gathering duties.
During the reception, several fellow officers listened to Kanarr’s last radio call marking his retirement.
Kanarr said, “The Bourbon community made me feel very welcomed here. They are professional and everyone works together well.” He also spoke highly of the Marshall County Sheriff Department, where among other duties as a jailer and dispatcher, he served as a canine officer. When he left that position, he was allowed to care for the service dog, Xato, who was being retired.
Bourbon Town Council President, Ward Byers, presented Kanarr a plaque for his service. Byers said he has known Kanarr for 30 years and found him to be conscientious and honorable. Byers said, “This is a bittersweet day, but we are happy for Rick and his wife Kelly to be able to make the move to Brown County.”