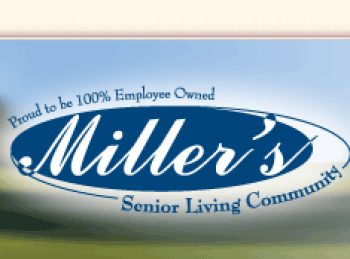 Residents and staff still found ways to celebrate Memorial Day at Miller’s Assisted Living on Monday. While visitors are still not allowed in the building the residents were treated to their RESIDENT meal of the Month where they choose the menu. Activity Director Cindy Flagg had asked that all residents and staff observe a moment of silence at 3:00 p.m. as is customary across the United States. As part of the TAPS ACROSS AMERICA – CBS News “On the Road” correspondent Steve Hartman teamed up with retired Air Force bugler Jari Villanueva and urged veterans, musicians, teachers, and students of all abilities and ages to sound Taps on their front lawns, porches, and driveways also at 3 p.m. local time on Monday, May 25. Flagg who is a member of the Marshall County Church Orchestra chose to play TAPS outside the Miller’s facility in front of the American flag so all could observe. A special surprise was a “social distancing” visit from Veteran William (Hugo) Reese of Argos. Hugo is an original member of the Indiana Patriot Honor Guard. He also had an embroidered star retired US from flags for each Veteran residing at the facility. The star comes with the following saying:

“I am part of our American flag that has flown over the USA. I can no longer fly. The sun and winds caused me to become tattered and torn. Please carry me as a reminder that you are not forgotten.” Plymouth Miller’s Assisted Living says THANK YOU to all Veterans!