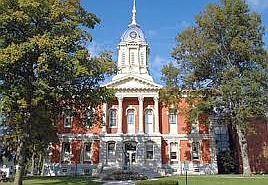 It is May 1 as I write this. We have all just completed the strangest month of April in our lives. But you do not need me to confirm the extraordinary measures undertaken by so many in our community, and the disruptive impact of this pandemic. Let me instead share some observations of my office and our local criminal justice system for the month of April.

April began with our offices strictly excluding public interaction, as well as operating with a skeleton crew. The five prosecutors in this office rotated the essential functions and responsibilities of screening cases, making the applicable charging decisions, and assessing risk in terms of pretrial detention or release. Police reports continued to be submitted to our office through a drop box delivery, very guarded hand delivery, or digitally when appropriate. Otherwise, the normal interaction with officers from the various departments has been greatly curtailed.

Each of the five prosecutors attended on their specifically assigned day initial hearings conducted in the various courtrooms, with the defendant appearing by video from the jail. The initial hearings for defendants released on bond, or called by summons, have all been delayed to mid-May at the earliest. No trials were conducted or contested hearings of any significance held other than requests to lower bond. The submission of plea agreements of jailed defendants has continued, as have some sentencings. Please note that each of the prosecutors have always had the ability to work their cases remotely with a computer and a phone. Nevertheless, their presence in the office on days not specifically assigned to him or her was frequent and welcome. Please also note I only refer to the criminal case docket and that the courts all had a wide range of civil matters to manage. Full crew reported for duty on April 21.

We do not know the answer to the question if crime decreased in the month of April. Police reports submitted to our office reflect a downturn. That metric does not, however, convince me that methamphetamine or heroin or opioid consumption has remarkably decreased. A decrease in retail theft is perhaps more a function of diminished opportunity due to fewer open retail stores, rather than people inclined to steal changing their ways. We have had arrests for domestic violence, burglary and other driving offenses, but failure to appear and Operating a Vehicle while Intoxicated remain the two top reasons a person is booked into the jail. Those persons generally make bond relatively quickly. Also, local media outlets adequately report the daily arrests and listed offenses from public information sources.

Here is some data we do know: as previously reported, on average between 6 to 7 people a day are booked into the Marshall County Jail, and that number has stayed constant for the last 12 ½ years, until now. In the thirty days of April 2020, 35 bookings occurred, making the average number booked into our jail at 1.17 persons per day. By every standard, that is a precipitous drop in jail bookings. We handle substantially more cases through summons and promises to appear, rather than events that demand public safety be preserved through immediate incarceration.

All of these factors and more result in more people being released from our jail for time served or movement to another jurisdiction or delivery to the Department of Corrections or Community Corrections for the remainder of a sentence, than are entering our jail for a prolonged pretrial stay. As I write this, the jail population is 163, substantially less than the 239 limit. The jail is at 68% capacity.

Thank you for this opportunity to share these observations. As we continue through these unusual times, I remain reluctant to make any definitive statement of the pandemic’s effect upon the level of incidences of crime, its clearance through apprehension, and our unwavering response to vigorously prosecute. I can say unequivocally that the current circumstances have not resulted in any early releases or other deviation from standard protocol of managing cases from detection and arrest to final resolution. I am proud and grateful to everyone in this office— staff and lawyer— that continue to deliver justice for crime victims, child support recipients, and whether recognized or not, even criminal defendants themselves. No invisible virus is going to diminish the administration of justice in our county. You can count on that.