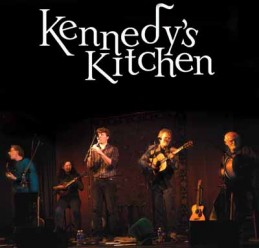 Buckle your seat belts and get on your dancing shoes for a spirited time with the well-known area Celtic band, Kennedy’s Kitchen, appearing on The Wild Rose Moon Radio Hour. Led by the sonorous-voiced baritone of John Kennedy, the band takes us through beautiful Irish ballads and a series of reels and jigs—many penned by Nolan Ledewski, one of the bands remarkable Irish whistle players. Along with Theresa Kubiak, the other extraordinary flutist, the band weaves its way through the sprightly sets, accompanied by John’s fine guitar, Chris O’Brien’s tender mandolin and banjo work, Jacob Turner’s bodhran backbeat, and Nathan Waddill’s integral bass playing.

Recorded before a makeshift audience in the cellar of Wild Rose Moon Performing Arts Center just prior to the advent of sheltering in place as a result of the Covid-19 epidemic, the show features interviews with many of the band’s leading band members, including Chris, Nolan ,Jacob, and JoHn. Leading out with a sprightly set of reels whose title derived from the challenge of a dark performance space in New York City, appropriately named, Dollar Store Light Set, the Kitchen immediately whistles and strums its way into the radio audience’s heart. Enjoying over 6000 views on the internet during the live taping, the show also includes The Shoot the Moon Quiz show featuring Nicole Turner and Irene Szakonyi, and the philosophical, “Moment with John,” featuring John Bahler, the music producer of the program. John Kennedy closes the evening with a beautiful rendering of a love song, during which he sings, “All my life, I’ve been so broken hearted . . . darlin’, oh, darlin’ make me smile.” All in all, it’s a lovely finish, for a lovely hour of songs and stories.