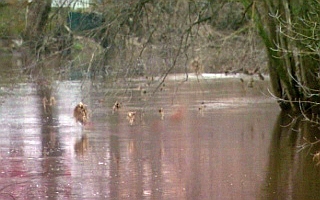 The Indiana General Assembly appropriated $2.3
million in state funding to the newly formed
Kankakee River Basin and Yellow River Basin
Development Commission. The legislature’s action
was the first step of broad initiative to tackle nearly a
century of water management challenges in the
Kankakee River Basin.
“Never before has the State of Indiana invested so
much in the Kankakee and Yellow Rivers,” said
Commission Chairman and St. Joseph County
Surveyor John McNamara. “We now can fulfill plans
rather than merely make them.”

The Kankakee River Basin in Northwest Indiana,
which includes both the Kankakee and Yellow
Rivers, was once the second-largest freshwater
marsh in the United States. Over a century ago, the
basin was drained to make way for over a million
acres of Indiana agriculture and a number of thriving
Northwest Indiana communities. However, the
underlying topography and geology of the basin
continues to cause wide scale flooding, heavy
erosion, and water management dilemmas
throughout the region.

“Despite being only months old, the Basin
Development Commission is aggressively moving to
put state and local resources to work,” said the
Commission’s Executive Director Scott Pelath. “I
was pleased to report to state officials that our eye
is on the long-term, but our energy is dedicated to
immediate progress.”

In his testimony to the legislature, Pelath described
how the Commission plans for the state dollars,
which include:
• Removing thousands of fallen trees and logjams that directly impede river channels
• Redesigning the sediment-heavy Yellow River banks in Marshall and Starke Counties
• Converting a Commission-owned farm in Newton County to a flood storage area
• Assisting Jasper County’s efforts to stabilize failing Kankakee River banks
• Preserving seven U.S. Geological Survey river gages and the vital data they provide
“These tasks constitute the opening phases of years
of work ahead,” said Pelath. “Our problems are
decades in the making, and not all solutions will
come quickly. But some things we can start
promptly, and we intend to do them. It is never too
soon to start making a noticeable difference.”
Commission Treasurer and Starke County Surveyor
Bill Crase agreed. “We have planned for years, and
now it is time to seek results,” said Crase. “I am
grateful that the long-term partnership of the State of
Indiana and eight Northwest Indiana counties is
making it possible.”