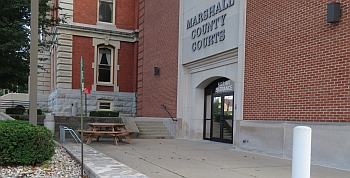 Judge Dean A. Colvin, of Marshall County Superior Court No. 2 announced this morning that the Indiana Legislature has passed Senate Bill 256 which adds a third Superior Court to the Marshall County and has been referred to Governor Holcomb for approval and finalizing the legislation to become law effective July 1 2021.

Colvin stated the legislation is a key to building a judiciary in Marshall County to serve the present and future needs of judicial services to the citizens of Marshall County.

We have seen an increase in the number and complexity of cases involving substance abuse, elder and veterans’ affairs which require significantly more time court time in adjudicating those cases and addressing the needs of individuals charge with criminal offenses.  The Judges of Marshall County will be receiving specialized training to address those issues in the target population when facing criminal charges.

As the Administrative Judge of Judicial District 5 covering Elkhart, Kosciusko and Marshall County I have seen the number of cases in drug and substance abuse, veteran’s and senior citizens grow in the district to address the same issues we face here in Marshall County.

The fourth court will open new opportunities to develop specialized courts to address cases where drugs and substance abuse, elder, and veterans are at issue.  The court will add much needed judicial time in  to the services of the court in both civil and criminal cases for better service to the citizens of our community.

Colvin, stated Marshall Superior Courts No. 1 and 2 and the Marshall Circuit Court have operated with the need for an additional judge for some time. Surveys conducted by the Indiana Office of Court services have supported the need for judicial services here in Marshall County.

I am pleased need for a fourth court has been confirmed by the state legislature.   The court which will be identified as Marshall Superior Court No. 3 will be deployed in July of 2021 the selection process for the individual selected to sit as Judge will be determined by a nominating process prescribed by the State of Indiana.

The committee passed a favorable recommendation on our request to the State Senate where SB 256 was drafted received the endorsement of Senator Ryan Mishler and Representative Jack Jordan who supported the bill throughout the process.

Finally, I would like to recognize the law clerks of Marshall Superior Court No. 2 Makayla Depoy and Matt Aldridge who assisted in the preparation of statistical information and materials presented to the Committee on Courts as well as the staff of Superior Court No. 2 who made the arrangements in my schedule for me to attend hearings, meetings and answer calls to promote our request.  With the efforts of so many we can look forward to the Governors signature on this important piece of legislation for the Citizens of Marshall County.