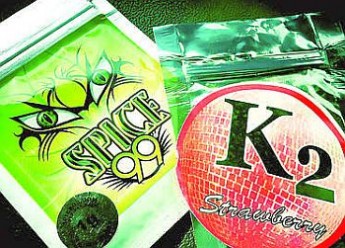 The Indiana State Department of Health (ISDH) is warning Hoosiers about the dangers of synthetic cannabinoids, often called fake weed, K2, spice, OMG, Scooby Snacks, AK-47 or other names, after reports this month that individuals in Illinois and Indiana suffered severe bleeding after using the substances.

“Synthetic cannabinoids contain hundreds of chemicals, and it is difficult to know what’s in them or how people will react to the ingredients,” said State Health Commissioner Kris Box, MD, FACOG. “These substances can cause severe, even life-threatening, bleeding. We have seen cases increase dramatically overnight in Illinois and know at least one person in Indiana has reported severe bleeding after using synthetic cannabinoids.”

Synthetic cannabinoids act on the same brain cell receptors as the main active ingredient in marijuana. While they are often marketed as safe and legal alternatives to marijuana, the health effects from synthetic cannabinoids can be unpredictable and harmful. Many of these products are packaged in ways that appeal to youth.