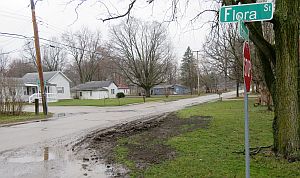 Several complaints of semis damaging residential yards in the area of Harrison and Flora Street prompted Plymouth Street Superintendent Jim Marquardt to address the issue with the Board of Public Works and Safety Monday evening.

Marquardt said the problem seems to be with out-of-town semi drivers who are using West Jefferson to Beerenbrook, then Harrison Street on to Flora to access the industrial park. He suggested possibly their GPS systems are having them use that route.  While the Street Department has received occasional complaints in the past Marquardt said, “This spring has been crazy on semis coming down Beerenbrook, trying to turn onto Harrison to go toward Flora and they’re tearing yards up.”

Marquardt said one resident went so far as following the semi to their stopping location and then called police.  Apparently since the city does not have any signage limiting semi traffic in the residential area the police couldn’t do anything.

Police Chief Dave Bacon told Marquardt if the Board of Public Works and Safety authorized signage limiting semi traffic off certain streets, his officer could enforce the restriction.

The Board of Public Works and Safety approved posting signs for “NO SEMI TRAFFIC” at Madison and Beerenbrook Streets as well as on Harrison.