What Does It Take to Become a Saint?

Do you want to know what it takes to become a saint? Join the Poor Handmaids of Jesus Christ on Saturday, April 21 from 1-4 p.m. in Cana Hall at The Center at Donaldson. Learn about the canonization process ­­of Blessed Catherine Kasper, foundress of the Poor Handmaids of Jesus Christ. An abbreviated presentation will also be held on Tuesday, April 24 from 8-9 a.m. in Cana Hall and again from 2:30-3:30 p.m. in the Kasper Room at Catherine Kasper Home. 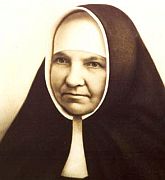 On March 7, 2018, the Vatican website announced that Blessed Catherine Kasper is officially approved to become a saint. The date of the canonization will be set by Pope Francis. Details will be arranged by the Vatican in conjunction with the diocese of Limburg and PHJC General/Provincial Leadership in Germany. The Poor Handmaids feel blessed that the approval has happened during the 150-year anniversary of their presence in America.

Guest speakers include Sister Grace Manjakunnel, PHJC Provincial of St. Joseph’s Province in the Diocese of Indore, Sister Flora Vedamuthu, PHJC Provincial of St. Mary’s Province in Bangalore, and Brother Leo S. Prabhakar, SHJ, Community Leader at Sacred Heart Foundation in Chennai. All three of these religious from India have been closely involved in the canonization process.

For more information on the Poor Handmaids and the special events planned for their 150-year anniversary, visit www.poorhandmaids.org.