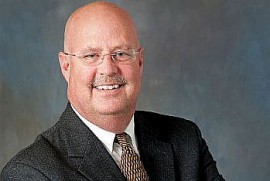 With the recent flooding, something the mayor has become accustom to, he took time to highlight the cooperation between the county and the city and the many volunteers who came forward to help their neighbors.  He thanked former mayor and current City Councilman Gary Cook for applying for the first of three FEMA grants to purchase homes in the flood plain and said he suspect the city will apply for more assistance for those in the Walnut and Plum Street area.

Mayor Senter discussed the second phase of the Greenway Trail from Founders Park to Garro Street with a footbridge over the “mighty Yellow”.  Construction on this project will start this spring.

The city was notified of the closing of Bay Valley in August and Del Monte in September.  He said working with the Marshall County Economic Development Corporation he could report that two things are in the works although they will not use the water and wastewater the prior industries did, having a negative effect on the revenues for two city departments.

Mayor Mark had positive comments to say about nearly every department in the city and noted the vast improvements at the airport over the last 7 years.  He also commented that Culver Academies will operate a summer training camp with 4 flight simulators, 8 instructors and several aircraft.  They will spend nearly $40,000 per month for three months this summer on the project.

During the State of the City address, Senter thanked the City Council for the diligent decisions and the City Attorney Sean Surrisi for 6 years of full time service to the community.  He also noted the work of the Mayor’s Youth Council, the dedication of city’s police officers, firefighters and paramedics along with the financial leadership of Clerk-Treasurer Jeanine Xaver.

Mayor Senter said in his closing, “I want to thank the 100 plus employees of Plymouth.  They all do an outstanding job and I hear nothing but praise while I am out and about in the city.  I commend each one of you for a job well done and I know you will keep up the great work!”

He continued, “Operating a city of 10,000 plus depends on great teamwork and I want to thank the department heads for going above and beyond and for enthusiastically going out of their way to make the city a positive place to live and work.”

Good evening and thank you for this opportunity to address the Common Council tonight on the status of this powerful city in which we live, work and play.

A CITY WHERE COMMUNITY AND POSSIBILITIES CONNECT

I first need to acknowledge what occurred just five weeks ago today.  That week of the flood of 2018 is just surreal to me and most of our city residents!  Obviously, it was the talk of the town!

I want to thank the Common Council for your input, your thoughts and your diligentdecisions thatare making this city go and grow.You all are really into what we are attempting to accomplish here in Plymouth!  You don’t always agree with the resolution or ordinance before you, but you are always respectful of the process!

What can I say about City Attorney Sean Surrisi that hasn’t already been said?  For six years now we realize that Sean can grab the bull by the horns and will not let go.  His leadership in working on the Aquatics Center is beyond reproach and he has his hands in almost all of our projects in some way or fashion.  He and Jerry Chavez have become fast friends in the many Regional Cities developments that we have taken up and it is truly appreciated.  Sean has proven to be a great writer, counselor, mediator, investigator, troubleshooter that has kept all of us out of hot water more than a few times.

Soon Sean will be opening a new office upstairs in our renovated City Hall.  Construction is a few weeks behind, but if you tour it now you can see it really taking shape with actual walls and new ceilings.  This is something that all of us can take pride in when its finished.  I need to thank the Common Council and the Redevelopment Commission for being involved in this from the beginning.  It will be a proud moment when we cut that ribbon in August!

The Mayor’s Youth Council has established themselves as young leaders in not only our community but statewide as well.  Several went to a conference at the statehouse on January 23rd and met with several legislators as well as Governor Eric Holcomb.  They were also scheduled to go to a conference in Bloomington on February 24th but chose to stay to volunteer with our flood team.  They have become a great liaison between students at PHS and The City administration!

Later this spring construction will begin on a second phase of the Greenways Trail from Founders Park to Garro Street.  This will include a new footbridge across the Mighty Yellow just north of Garro Street.  It’s another step to beautifying our downtown area and adding a new path to those that like to walk to our very popular River Park Square or the Farmer’s Market.

I am proud to work with the Marshall County Economic Development Corporation director Jerry Chavez.Starting with Bay Valley choosing to close their doors in August and ditto with Del Monte announcing in September, Jerry and his team have worked tirelessly to bring something back to our area.  The loss water and wastewater capital may never come back to what it once was, but there are two things in the works that are very positive, and I look forward to the future in that regard.

MCEDC has been on the forefront in assisting Plymouth with our Regional Cities’ projects.  Whether its River Gate South, the Boys & Girls Club, the Rees Theater or the Aquatics Center, Jerry Chavez has been a big part of working the angles and keeping us all informed of the many different pieces and parts of each of those developments.

The MCEDC is further entrenched in Marshall County by offering quarterly COUNTY DEVELOPMENT FOR THE FUTUREmeetings involving Lapaz, Bremen, Bourbon, Argos, Culver, Marshall County and Plymouth.  In these luncheon meetings, egos and turf wars are left at the door and a regional concept of economic development is positively discussed.  This is very unusual for so many government entities to get together four times a year to share their achievements and their positive projects.Thank you, Jerry, for all that your team is doing to assist all the entities throughout Marshall County!

Wastewater Department is nearly finishedwith their major $10.8 million improvement adding an aeration filter, a clarifier and a dewatering facility.  Thank you to Donnie Davidson’s leadership and his two teams of hard working city employees.

In the last seven years we have seen an abundance of positive changes to the Plymouth Municipal Airport. Former manager Dave Lattimer brought many great ideas and optimism to the airport and his leadership was truly appreciated.   Things are still looking up as our new director Bill Sheley has been focused on bringing Culver Academies to the airport for student training during their annual summer camp.  With rent and fuel Culver Academies will be spending nearly$40,000 per month for three months this summer.  They will also be bringing new signage, four flight simulators as well as eight flight instructors and just as many aircraft for their training.

We cannot talk enough about public safety and those dedicated officers, firefighters, paramedics and volunteers that keep us safe 24 hours a day…7 days a week.  I would like to thank the common council for financially taking care of our public safety officers in 2017.  And to the committee of Don Ecker, Gary Cook and Bill Walters for their dedicated work on this subject and reminding us that in the future we must do a better job of keeping these wages comparable to other public entities throughout the State of Indiana.

Unveiled last year just before the Blueberry Festival were the 22 new way-finding signs guiding visitors to the surroundings in their new unfamiliar environment. This has had a positive impact on not only our downtown but throughout The City.  I want to thank the committee of nine that were very conscientious in coming up with great locations for all these signs.  Again, this is part of the comprehensive plan that took effect in 2013 that also included a new logo, slogan and welcoming signs as you enter Plymouth.

We are currently moving toward closing on the County’s first New Markets Tax Credit deal, an $11 million development of a 10-lane indoor aquatics center, new offices for the Marshall County Community Foundation and United Way, and an early childhood learning center to be operated by South Bend-based Growing Kids. Through New Market Tax Credits and Regional Cities funding, approximately $5 million is being leveraged to make these projects a reality.

The Aquatics Center will be used for competitive and recreational swimming and diving through cooperative leases by the City of Plymouth, the Plymouth Community School Corporation, and Ancilla College. The community views the early childhood learning center very much as a workforce development win. The Growing Kids facility will be vouchered and On My Way Pre-K eligible. Currently, the County has few voucher qualified centers. Its anticipated that the addition of Growing Kids will allow many parents who are sitting out of the job market because they can’t afford childcare to jump back in. Due to the near record low unemployment we’re experiencing, adding new people to the workforce is key to our continued economic growth. Also, providing such parents with job opportunities serves the ultimate goal of our Regional Economic Development Strategy Plan to increase personal per capita income.

Clerk-Treasurer Jeanine Xaver keeps us all on our toes with her financial leadership.Municipal financing is a complexity of numbers like no other and Jeanine is great at figuring it all out!  We will be meeting <> to concentrate on the Fee Schedule changes that are an absolute in our present financial environment.  Thank you, Jeanine, for your leadership!

In closing,I want to thank the 100 plus employees of Plymouth.  They all do an outstanding job and I hear nothing but praise while I am out and about in The City.  I commend each one of you for a job well done and I know you will keep up the great work!

Operating a city of 10,000 plus depends on great teamwork and I want to thank the department heads for going above and beyond and for enthusiastically going out of their way to make the city a positive place to live and work. Some of them probably average 60-hour work weeks…some are on call keeping us safe in the wee hours of the morning…some are great organizers…all of them have one thing in common:  we have great leaders amongst us!

Author Margaret Wheatley once said, “There is no power for change greater than a community discovering what it cares about.”

I think this past few weeks we have found out that we are one awesome community and our possibilities are connecting each and every day!