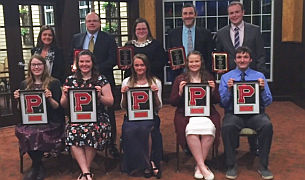 Top academic students of the Plymouth High School 2018 graduating class were honored at banquet sponsored by PHS and U.S. Granules on March 19. It marked the thirty-second Annual Academic Excellence Recognition event. The students are ranked in the top 5 percent of the class of 247.

Each one of the students selected his/her most influential  teacher to attend and share with the audience what qualities that teacher possess to inspire them and then presented them with a plaque showing their being honored.

Chaney welcomed the parents present and chosen teachers of the students as well saying, “The greatest thing in America is a support family.”

Master of Ceremonies for the evening was Plymouth Schools Superintendent Andy Hartley. Hartley said, “This begins the season of celebration.“ Speaking to the selection of influential teachers by the students, he said, “The idea of gratitude is good for the soul.”

Sydney Morris honored PHS teacher Mei Guan. Morris is  the daughter of Joseph Morris and Lynn Morris. She plans to pursue further education in Linguistics. “She said, “I only needed one day in her class to know that she was my favorite teacher.” Morris took five years of Chinese studies with Guan that lead to her visiting China last summer. She said, “She is an influential teacher and one of the most influential people in my life.” 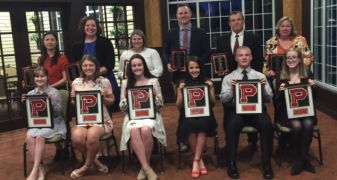 McKenzie Scheetz chose PHS teacher Haley Church to honor. Sheetz will be attending Butler University where she will study Health Sciences/Physician’s Assistant. She is the daughter of Michael Sheetz and Stacy Sheetz. She said the Church let her use her creativity and imagination. “As my art teacher, volleyball and swim coach, she is one of my biggest supporters. She is an incredible person and role model.”

PHS teacher Delia Gadziola was the honored guest of Leah Smith. She is the daughter of Dr. Timothy Smith and Sarah Smith and plans to pursue degrees in Biology and Spanish. Speaking of her Spanish teacher, Smith said, “She challenged us to perform to the best of our abilities.” “ She has an unwavering belief in her students.”

Riley Heeren, Lincoln Junior High teacher, was chosen by Maggie Nate. She is the daughter of Troy Nate and Kristi Nate. She will be attending Indiana Wesleyan University to major in Exercise & Pre-Occupational Therapy. She said Heeren taught her to have fun, not fear. She said, “He is completely selfless in all that he has done. “ She thanked her most influential teacher for investing in and changing her life.

Ryan Rust, PHS teacher, was honored by Nathan LaFree. He is the son of John LaFree and Shelly Lafree. He will be pursuing further education in the fields of Biochemistry/Pre-Med. He said, “ Mr. Rust has inspired me to be a better learner and a better man.” Rust served as his math teacher and wrestling coach. LaFree said, “He taught me some valuable math skills and life skills.”

Suzette Read, PHS teacher, was the guest of Grace Morris. The daughter of Joseph Morris and Lynn Morris, she plans to pursue a degree in Environmental Engineering.  She said, “Mrs. Read goes up and beyond to teach her students the subject matter. “ She went on to credit the course work in Read’s biology class with her decision to continue her studies in the environment.

Autumn Wilson chose Amy Schmaltz, PHS, as her most influential teacher. She will be attending Saint Mary-of-the-Woods College and major in Music Therapy. She said Schmaltz is kind, welcoming, friendly and thoughtful. “She taught us life skills that will help us in the future. She pushes us to donor best.” She said. She is the daughter of Rick Wilson and Tracy Wilson.

Audrey Himes named Dr. David Smith, PHS teacher, to honor. She is the daughter of Todd Himes and Dianne Himes. She will attend Purdue University and major in Animal Sciences. She said, “He always comes to class with a smile and always demonstrates significant passion.” She went on to speak about his dedication and faith towards his student’s future.

Natalie Hart, daughter of Bill Hart & Stacy Hart and Joseph Gaerte & Kim Gaerte, will be attending Vincennes University to study Conservation Law. She chose Stephanie Wezeman, PHS teacher, as her most influential teacher. “She tells me how to improve. I am most thankful for her help in my collage applications and references.”

Olivia Emmons honored Ryan VanAntwerp , PHS teacher. She will be attending Indiana University where she will further her education in Finance. She is the daughter of Todd Emmons and Tina Emmons. She explained that she was a freshman at the same time VanAntwerp was starting his first year teaching at PHS. She said, “He has shown me what I am capable of doing. He is selfless and encouraging.”

David Hatcher, PHS teacher, was named as her most influential teacher by Jacquelyn Peynado. The daughter of Victor Peynado and Maria Peynao, she plans to further her education in the field of Nursing.

She was unable to attend the honor banquet.

Kadin McCrammer honored Jake Singleton, PHS/WSOI teacher. He will be attending Loyola University to further his education in the medical field. He is the son of Eric Mann and Beth Mann. He said, “Mr. Singleton always pushed me to be the best I could be. He taught me many valuable lessons. “

Entertainment for the evening was provided by PHS senior and music student Jonas Stanley. PHS Principal, Jim Condon, said although Stanley was graduating with the 2018 Class, he would be invited to share his talent on the piano at next year’s event.