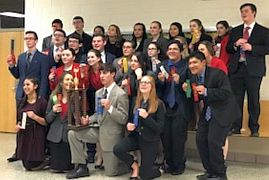 The Plymouth High School, Speech and Debate Team is hoping to find a few more sponsorships for competitors who qualified for the state tournament in Fishers on March 10.

To qualify, students had to be in the top six in their event at the sectional meets held two weeks ago. There are eight sectionals held throughout the state, meaning 48 competitors in a variety of events will compete for placings.

Assistant Coach Daniel Tyree said there are 27 PHS students who either have to get a sponsor from the community or their parents have to pay $100, which is only a portion of the cost for transportation and overnight accommodations. Tyree said, “These are deserving competitors and will be encouraged if they can find sponsors.”

Tyree explained that some of the team members qualified in more than one event and they will have 35 entries. He said, “Speech teams are allowed forty entries at the sectional tournament. This year we had the full forty entries.” Due to the flooding resulting in school closings for several days, they were only able to practice one time prior to the sectional. Although five of the entries failed to advance, they were by students double entered and all 27 captured a state bid.

Tyree said, “We have a small, but very strong senior class leading us to the tournament and a large junior class that will be taking a lot of experience to the tournament.” “We also have a good group of sophomores and freshman making their way to the state tournament for the first time.”

He added, “In the last 38 years, the team has finished in the top five teams at the state level when they finished seventh.” “So the team has a history of excellence.”