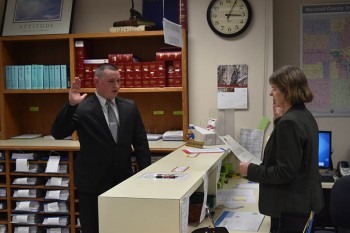 The Marshall County Sheriff’s Department announces the hiring of Richard Ayala for the position of Patrol Officer.
Richard Ayala is a 2009 graduate of John Glenn High School and a 2014 graduate of Indiana University South Bend with a Bachelor of Science Degree in Criminal Justice. Richard is 28 years old, married and currently residing in North Liberty, Indiana. Richard formally worked for the Saint Joseph County Sheriff’s Department as a Jail Officer and currently serves as a Patrolman First Class with the Walkerton Police Department where he has been employed for the past 2 ½ years.
“We look forward to having Deputy Ayala employed with us and started his service to the Marshall County Community,” said Sheriff Matt Hassel.