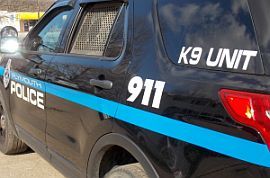 Employees told the officer the man came into the store and went to one of the aisles, took an item off the shelf and placed it in his hoodie.  He went to the cashier and pulled out an item from Martin’s Supermarket and tried to return it.  When the employee told him it was from Martin’s he pulled out the other item that he had just taken without paying for and wanted to return it.  When he was told they would not do a refund without a receipt he left.

Officer Weir and Corporal Hite went to Martin’s and using security found that the suspect had taken an item from Martin’s without paying for it.  An employee at Martin’s identified the male as 41 year old Darrick Szymanowski of Plymouth.   Corporal Hite located him a short time later and Officer Weir transported him to the Marshall County Jail and booked him in for theft.