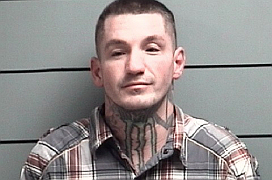 On Monday evening, February 26th, at approximately 7:05 p.m., the Marshall County Dispatch Center received a report from a resident on Ironwood Road in Plymouth in a red pickup in their backyard crashed into their fence.

The vehicle was still running and there was a male inside that appeared to be intoxicated and passed out.

Upon arrival, County Officer Giordano and other Officers with the help of Plymouth Fire Department were able to gain entry into the secured vehicle using force and made contact with the driver, later identified as Kevin Irwin, whom was under the influence of alcohol.

Irwin was taken to the hospital where he tested over two times the legal limit. He was later booked into the Marshall County Jail for Operating While Intoxicated and for Operating with a BAC of .15% or more.