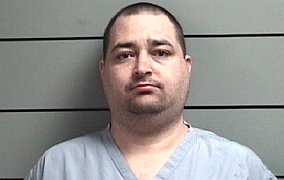 A Fort Wayne man is behind bars after being stopped by County Police Officers Sunday morning, February 25th after he was clocked at 89 MPH in a posted 50 MPH speed zone and ran the red light at US 30 and Pioneer Drive.

County Police were alerted to an unsafe driver who was speeding in a small white passenger can traveling east on US 30.  Officers Wozniak and Brouyette were able to stop the vehicle.

The driver, 37 year old Kenneth J. Simmons was found to be under the influence of alcohol.  Simmons refused to exit the vehicle and rolled his window back up.  He put the vehicle in drive, at which point officers were forced to break his driver window to keep him from leaving the scene.

Simmons was taken into custody and a certified blood alcohol test was completed, showing him to be over two times the legal limit of alcohol.  He was transported to the jail and booked for operating a vehicle with a BAC of .15 or more, operating a vehicle while intoxicated, reckless driving and resisting law enforcement.

Marshall County Police were assisted by Plymouth Police and EMS.