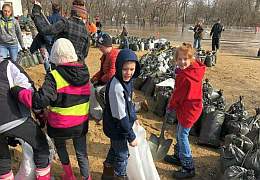 On Thursday, several Webster Warriors visited an area in the city of Plymouth off of Water Street where volunteers were filling sandbags. Among the students were Webster second grade student Ava Nelson, her brother Joel Nelson who is in kindergarten and their mother Brittany Nelson, who is a classroom aide at Webster Elementary School. Nelson said, “I read about the need for help online and once Ava and Joel finished their eLearning assignments we bundled up and drove down to Water Street to volunteer for close to three hours.” After bagging sand Ava said, “It feels good to help so many people.” Her brother, Joel said, “I like to help people and it felt good to be able to help people. 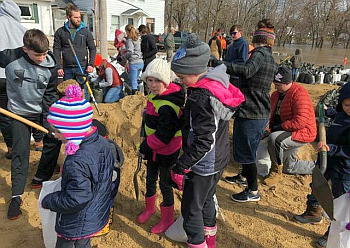 Friends Holly Walters and Tonya Warner also decided to spend a few hours sandbagging at the Water Street location on Thursday as well. Walters said, “Tonya saw the post asking for volunteers to help with sandbagging on Facebook and she asked if we wanted to go help. My two kids and I said yes because helping our community is important. Eloise Walters a kindergarten student at Webster and her big sister Isabella Walters, a fourth-grade student spent close to an hour shoveling sand into bags alongside Warner and her daughter, third grade Webster student Olivia Warner. 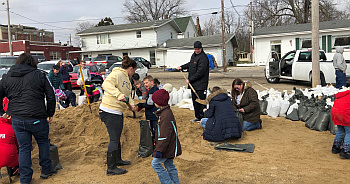 Walters said, “Our kids had fun together and it’s so awesome to see little people making a little bit of difference during this difficult time for Plymouth.” Her daughter Isabella said “I was grateful that I could go today and experience what nature looks like and how reckless it can be. It felt good to help people that are in need of the sandbags. I just feel bad for all the people who are flooded and wanted to help today.”