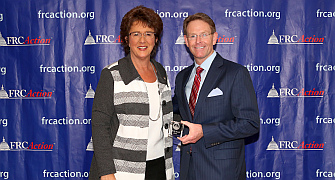 Family Research Council (FRC) Action recently released its annual scorecard for the First Session of the 115th Congress. U.S. Representative Jackie Walorski (R-Ind.) is among a new record of 245 Members of Congress who scored a perfect 100 percent for votes cast last year. She was recently presented with FRC Action’s “True Blue” award for displaying unwavering commitment and consistent support of faith, family, and freedom.

“Representative Walorski deserves praise for her unwavering commitment to stand for life, family, marriage, and religious liberty. Hoosiers should be encouraged to know that they have a Member of Congress such as Rep. Walorski who has come alongside other members and our president to begin the work of rebuilding our nation, and protecting the very values that made America great,” concluded Perkins.

“Family is the foundation of a strong society, and I am committed to defending the true American values of faith, family, and freedom. I am honored to receive Family Research Council’s ‘True Blue’ award and grateful to continue working together to protect the unborn, defend religious liberty, and support family values.”