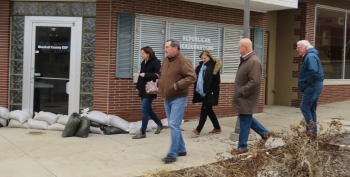 Donnelly’s first comment to Mayor Mark Senter and Marshall County Emergency Management Director Clyde Avery, “I guess we make the right decision to take those houses out of there and create a park.”    Although the Senator has seen flooding in Plymouth several other times, this flood was a record setter and he was able to see who the floodwaters impacted the businesses along Water Street. 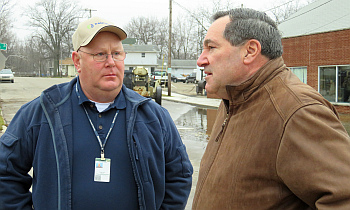 Clyde Avery from EMA told the senator that many of the folks impacted by the high flood waters are without flood insurance and don’t have the wherewithal to rebuild.  He said, with several weeks of winter left there will be families who have lost their furnaces and hot water heaters and won’t have the means to replace them. 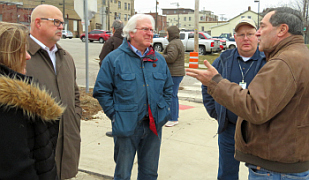 Mayor Senter spoke of Bowen Printing on South Michigan Street who basically lost everything.  This is the first time is history the building had floodwater reach the inside of the building even though there was a valiant effort to sandbag.

Dawn Smith from Bowen Printing said they are not letting the historic flood get to them…they are looking for a location to move into until and will open business as soon as possible.

Linda Yoder from United Way told the senator the community is rallying to assist those in need.  United Way’s 211 is a resource families and businesses affected by the floodwaters can use to assist in finding resources to help them in a variety of ways.

An Incident Command Center opened at 8 a.m. Monday in the old dentist office across the street from the Post Office on Garro Street.  They will have clean-up buckets, hygiene kits, blankets and laundry kits put together from 4th grade students at Triton Elementary School.

Cash, check and credit card donations to assist those in Marshall County needing help to repair and or rebuild after the flood can be dropped off at the Unite Way Office at 2701 North Michigan Street in Plymouth or mailed to P.O. Box 716.  On the check note Flood Response.