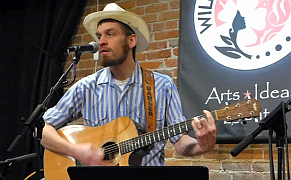 This Saturday, February 24th, at 11:00 a.m., the Wild Rose Moon Radio Hour will feature Plymouth’s own extraordinary songwriter and instrumentalist, John Bahler.  John grew up playing in his family band and he has developed an extraordinary cross-picking style which makes one instrument sound as if it were a small band.  His musical influences include the styles of country, folk, early rock n roll, swing, singing cowboy music, hymns, and bluegrass.   John has played on stage with many musicians, including his own Stampede String Band,  and is the musical director of Plymouth’s own, Wild Rose Moon Radio Hour—now it’s 13th episode. John’s wry sense of humor and contemplative nature add to the fun of any performance.   Also, on the program, will be songwriter and Rochester resident, Mike Kenny, who will share one of his original songs.  The announcer for the show is Sid Shroyer (WVPE, regular) and George Schricker hosts.

The Wild Rose Moon Radio Hour is recorded in front of a live audience that is invited to participate in the show.  During the program audience members have the chance to be chosen for the Shoot the Moon Quiz Show which features four questions related to the featured guest’s biography.  It’s all happening in Historic Downtown Plymouth, at Wild Rose Moon’s Little Moon Theater, 115 North Michigan Street.  Where the Michigan Road and the Lincoln Highway cross the beautiful Yellow River… It’s The Wild Rose Moon Radio Hour.