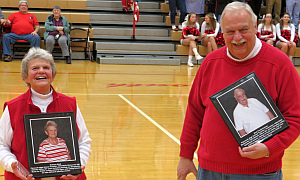 Those selected have given support and service through their lifetime to Plymouth High School Athletics.

Plymouth High School teacher from 1976 to 2010 Kathryn Hiatt was honored Tuesday night.  She has worked for the PHS Athletic Office for over 40 years.  Miss. Hiatt has organized and worked the Hospitality Room for IHSAA event, sold tickets at athletic contests in 9 different sports and made signs that hang at IHSAA events.

Richard Featherstone a PHS teacher and Counselor from 1965 to 2004 has worked for the PHS Athletic Office for over 50 years. He has worked at basketball games and track meets.  Mr. Featherstone started working in Centennial Gym whe the Pilgrims still played there.  He’s sold tickets and made popcorn in the concession stand.