Elkhart Woman Arrested for False Informing and DWS Prior 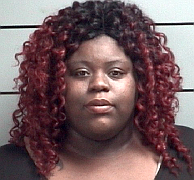 An Elkhart woman is behind bars today for false information to a police officer.

During the stop the driver, 21 year old Selena Gary told police she was driving only because her child had been shot when the officer found her to be operating on a suspended driver`s license.

Her claim was found not to be true.

Selena Gray was lodged in the Marshall County Jail with
a $750.00 cash bond.