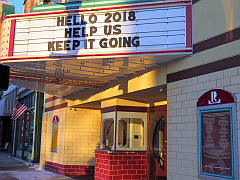 Tuesday evening Randy Danielson gave the Plymouth Redevelopment Commission an update on the Rees Theatre project.  He said Phase I is complete and in two weeks they will have reached the first anniversary of the building being moved to a not-for-profit.

Danielson told the Redevelopment Commission that they were awarded a grant in the amount of $300,000 from the Regional Cities Initiative.  The grant requires public funding support as well as private donations.

The Redevelopment Commission would need to put this project on their list of projects in order to be able to receive public funding for the project and it must be completed by the March 31st deadline for the grant.  The process of adding the project is rather lengthy and includes approval from the Plymouth Plan Commission and City Council before a Confirming Public Hearing can be done by the commission.

The Rees Theatre Project is seeking $575,000 from the Redevelopment Commission towards the project.

A public hearing at the Redevelopment Commission meeting is tentatively scheduled for March 27 at 5:30 p.m.

It was noted by Commission President Dan Tyree that the money for the project wouldn’t be spent until construction which has been estimated to be early 2019.

Danielson said the committee hopes the theater will open in 2020, the 80th anniversary of the theatre.