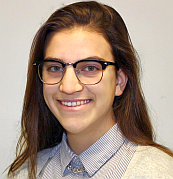 Loren Mattern, Plymouth High School Class of 2018, has been matched to the University of Pennsylvania through the QuestBridge National College Match Scholarship program. She has received direct admission to the Wharton School of Business at the University of Pennsylvania, currently ranked by US News & World Report as 1st among business schools in the nation. The college is located in Philadelphia.

Students selected for the College Match are matched to one of QuestBridge’s highly selective college partners, which means Mattern has been admitted early with a guaranteed full, four-year scholarship, including tuition, room and board, books, travel, and other expenses. The national program pairs high achieving, low income high school seniors with full scholarships to the top colleges in the nation. In October, Mattern was notified that she was a one of 5,759 finalists chosen from 15,606 applicants. Just last week she was notified that she is among the 918 winners!

QuestBridge’s college partners include top liberal arts colleges such as Amherst, Colby, Hamilton, Pomona, and Williams and exceptional research universities such as Brown, Columbia, Duke, UChicago, Stanford, and Yale. Mattern said out of all the possibilities there was only one clear choice for her to attend. “There was no school I considered ahead of Penn, Wharton specifically,” said Mattern. “All the tools I need for success will be at my fingertips, and I cannot wait to make the most of them.” Mattern currently holds a 4.0 GPA and is ranked 17th in the class of 249 students.

Last summer, she spent the month of July in Philadelphia as a participant in Wharton’s Leadership in the Business World program. “The aura of Wharton changed me. Limits on possibilities simply faded away, and now I feel that nothing could stop me from accomplishing any goal. I plan to dive even further into entrepreneurship opportunities as I study finance next fall because the resources available to students are limitless,” said Mattern.

She found out about the QuestBridge National College Match Scholarship program from Plymouth High School English Teacher Stephanie Wezeman and for that she says she will be forever grateful.

“I am thankful for the teachers and mentors I am surrounded by, day in and day out. None of this would have been possible without their incredible influence, especially that of Ms. Stephanie Wezeman. I will forever be grateful for having such a strong, encouraging role model in my life,” said Mattern.

In addition to impressive academic qualifications, Mattern has an extensive resume of service. She founded the Marshall County 5K Against Domestic Violence in support of the Heminger House shelter in 2016 and doubled donations and participation with the 2017 event. Mattern is also an active member of Key Club, PHS Dance Marathon for Riley Hospital, and National Honor Society.

The National College Match is a highly competitive process, and this year’s College Matches have impressive achievements. Academically, the 918 College Matches have an average unweighted GPA of 3.92. On standardized testing, the middle 50% received between 1350-1490 on the SAT and between 29-33 on the ACT. 95% rank in the top 10% of their class.

Since 2003, the QuestBridge National College Match has successfully connected over 5,000 students with full scholarships to college partners. This is the first time a PHS student has matched through Questbridge. Calvin Raymond, class of 2017, and Kelsey Shaffer, class of 2012, were selected as finalists but did not match