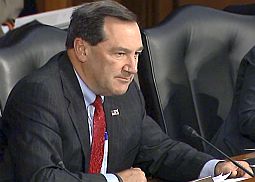 Washington, D.C. – In its newest lifetime rankings of the U.S. Senate, the Lugar Center and the McCourt School of Public Policy at Georgetown University recognized Senator Joe Donnelly as the second-most bipartisan Senator since 1993. He is the highest ranking Senator on the index currently serving in the Senate. The new Bipartisan Index ratings reflect Donnelly’s effective work with Republicans to get things done for Hoosiers. He has had many provisions signed into law since coming to the Senate, including legislation to address military mental health and the opioid epidemic. Donnelly is expected to have another provision signed into law in the coming days, as the national defense bill includes his North Korea strategy amendment. Earlier this year, the Lugar Center ranked Donnelly as the second-most bipartisan member of Congress in the 114th Congress (2015-2016).

Donnelly said, “As the hired help for Hoosiers, my job is fight for good policies that will benefit Indiana. In Indiana, we know that the best results come when we work together, which is how I’ve been able to advance numerous provisions that have been signed into law since 2013, including efforts to improve military mental health, combat the opioid abuse epidemic, recognize and help veterans, and keep our country safe.”

Examples of Donnelly’s successful bipartisanship include the following: