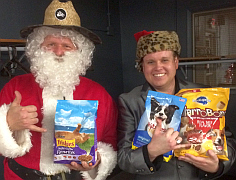 “Here Comes Santa Claus” was heard throughout the Memories Reception Hall when local crooner Quentin Flagg and guest vocalist Chicago Ed joined together to welcome Santa Claus Flagg’s Tropical Christmas Show Saturday evening, Dec. 2.  Santa had been resting up in the Bahama’s before his flight on Christmas Eve.  His casual beach attire fit right in the concert theme.

Flagg is well-known for his love of helping others and he found a way to give back to the community at his annual Christmas show.  He asked his fans to bring donations for the local Marshall County Humane Society.  As his fans are loyal and never let him down they arrived with loads of dog and cat food, treats, pet beds, pet toys and many other needed and welcomed items for the society.  Hehelped the local Knights of Columbus #1975 to run the snack bar with proceeds going to their organization.

Q, as he is known to his many fans and Chicago Ed entertained throughout the evening with rock and roll, country, and Christmas favorites.  Flagg also held an “Ugly Sweater Contest” and a “Best Tropical Outfit Contest” with many prizes given out during the evening.

Photo Contest:  Quentin Flagg and Santa Claus would like to thank the fans for their generosity to the Marshall County Humane Society at Flagg’s recent Tropical Christmas Show held at Memories Reception Hall in Plymouth.