Riverside Presentation to School Board on Robotics Club 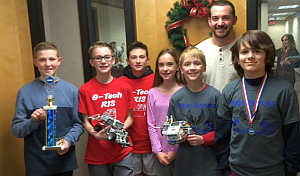 During the Plymouth School Board meeting on December 5, six members of the Riverside Intermediate School Robotic Club explained how they work together on a project for competition.

Max Lewandowski, Jason Warner, Coby Walters, Lily Macey, Jacob Faulstich, and Austin Ward are a part of a 15 member team coached by Riverside sixth grade teacher Wade Mattis. The team meets after school two days a week to formulate a project, code and build Lego robots, and write their script for presentations. Mattis has been coaching the Robotics Club for the past four years. He said, “Robotics provides an activity that anyone can participate in. It brings a very unique set of kids together who normally wouldn’t be together.”

The team has been meeting since August. Macey explained that their project for a competition held at Discovery Middle School in Granger last weekend was about hyro-dynamics. She said they built their robots to help find water solutions for farmers. She said they had to explain how the team works together and provide a poster showing it. The team won a trophy for the core values portion of the contest.

The team project showed how to gather and store water using their robots Mattis said the students competed every part of their project themselves with only a few suggestions from him.

School Board President, Todd Samuelson, commented on their presentation saying, “The teamwork you are developing now applies across the board.”